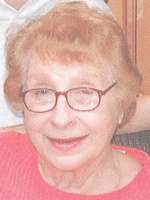 age 81 passed away peacefully and went to be with the Lord on May 20, 2010. Born on October 12, 1928, in Bessemer, Michigan, to her immigrant parents Mary and John Babich, who immigrated from Yugoslavia. She was the youngest of four sisters and one brother. As a child, she loved sports, music and books, the last two of which became lifelong interests. She worked as a legal secretary in Milwaukee, Idaho and California before moving to Arizona in 1957. She married Alan Ted Clawson in 1954, who preceded her in death in 1987. She was a caring, loving, mother, wife and Christian, who devoted much of her life to her church after the death of her husband. She loved classical and religious music, and always offered a prayer to her family and friends for whatever was their need at the time. She was a member of St. Francis Xavier Catholic Church for close to 40 years, and was active in St. Vincent de Paul and Eucharistic Ministry to shut ins over the years. She is preceded in death by her sister Eve Ellis and brother Johnny Babich, and survived by her sisters Julie Anhen and Mary Marzack, her son Aric Clawson, his wife Carolyn, three wonderful grandchildren, and numerous nieces and nephews. Visitation will be held on Tuesday, May 25, 2010 at 8:30 A.M., following with a Rosary at 9:30 A.M. and Funeral Mass at 10:00 A.M., at St. Francis Xavier Church, 4715 N. Central Ave., Phoenix. Funeral arrangements by Whitney & Murphy Funeral Home.

Offer Hugs From Home Condolence for the family of CLAWSON, CATHERINE MARIE