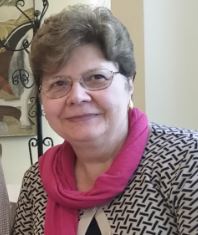 Alba was born to Ovidio and Irma Giuntoli on August 30, 1942 and raised in the village of Traversagna, Italy. At the age of 11, she moved with the family from Italy to Phoenix. Alba learned English and graduated from St. Mary’s High School (’60). She earned a scholarship to Arizona State University to study French and Spanish and graduated with a Bachelor of Education (’64). She continued her studies on scholarship at ASU earning a Master of Arts in French (’65). In her first year teaching French and Spanish at Carl Hayden High School she met, fell in love with, and married James Clay who taught English across the hall. They were married until Jim’s passing in 2002. During her 30 year career in the Phoenix Union High School District she served as World Language Department Chair and Unit Chair for the Classroom Teachers Association until retiring.

One of her proudest moments came in 1984. During the Papal visit to Phoenix by Pope John Paul ll, Alba had the honor of serving as the personal French language translator for the Pope. After retirement she continued to be generous with her time. She volunteered with the Needlewielders. The group knits blankets for babies and helmet liners for members of the armed forces. She also volunteered at Mercy Gilbert Hospital. Alba was a proud breast cancer survivor.

Alba loved reading and found great joy in gardening and taking care of the family dogs. She lived for her family and there was nothing she wouldn’t do for her children and grandchildren as she loved them all dearly. She is survived by her daughter Gina Vullo; son-in-law Steven Vullo; daughter Juliana Mandat; grandchildren Joey Vullo, Natalie Mandat, and Augie Vullo. She also leaves behind her beloved brothers-in-law, cousins, nieces, nephews, and friends.

A celebration of her life will be held on Saturday August 10, 2019 at 10AM with a visitation beginning at 9AM at Whitney & Murphy Funeral Home, 4800 E. Indian School Rd., Phoenix. Interment will follow at St. Francis Catholic Cemetery. Condolences may be expressed at www.whitneymurphyfuneralhome.com

Offer Hugs From Home Condolence for the family of CLAY, ALBA GIUNTOLI