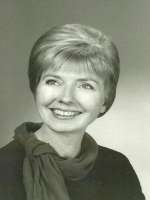 Eileen Aschauer Claycomb, 86, of Scottsdale died April 5th. She was born to the late Joseph and Rose Treuer, April 17, 1925, in Cleveland, Ohio. Eileen graduated with a Bachelor of Fine Arts from Arizona State University in 1983. She married the late Nelvin Claycomb in December 2000. Eileen worked in secretarial positions in North Olmsted, Ohio; Phoenix; and Scottsdale. She loved music and played organ and piano, directed choirs and sang at several churches in the Phoenix area. Eileen also enjoyed taking care of her dear dogs, especially Sam, her black standard poodle. Eileen is predeceased by daughter Sandra Kay Lathan. She is survived by daughter, Amber Wear of Tempe and stepdaughter, Mary Rossell, of Wilton, CA. and three grandchildren: Shalyn, Jerry and Shannon.
A Visitation will be held from 3:00pm to 8:00pm with a Rosary at 4:00 pm on Thursday, April 12th, at Whitney & Murphy Funeral Home, 4800 E. Indian School Road. Funeral Mass will be at St. Mary’s Basilica, 231 North 3rd Street, Phoenix at 10:00 am on Friday, April 13th. Flowers sent to the Rosary will also be taken to St. Mary’s Basilica for the Funeral Mass. Donations can be made to The Humane Society or American Cancer Society, both important to Eileen.

Offer Hugs From Home Condolence for the family of CLAYCOMB, EILEEN N