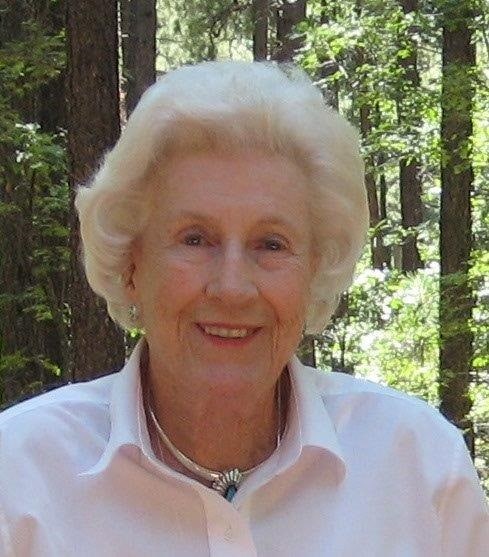 Barbara Burrall Clelland, 97, a life-long Arizonan, passed away peacefully on July 28, 2022 in Phoenix.

She was born September 23, 1924, the eldest daughter of Edward and Marguerite Burrall. Barbara graduated from Stanford University in 1945 with a Bachelor’s degree. She decided to stay at Stanford for post graduate work.  She met her future husband, Frank W. Clelland Jr., while at Stanford.  Barbara and Frank were married at Trinity Episcopal Cathedral in Phoenix in 1947.  They spent the next 60 years celebrating life together until his passing in 2008.

Barbara’s life was focused on raising her family, nurturing and maintaining many life-long personal friendships, and actively supporting several Phoenix organizations with her time and talents including The Board of Visitors (formerly St. Luke’s Board of Visitors), Junior League of Phoenix, the Heard Museum Guild, the Arizona Columbine Garden Club, and ARCS Foundation Phoenix.

Her hobbies included playing golf and tennis, snow skiing, hiking, playing bridge and gardening.  She was an active member of the Phoenix Country Club, the White Mountain Country Club and the Valley Field Riding and Polo Club.

Barbara is predeceased by her parents, a sister and her husband.  Surviving family members include a sister, four children, one daughter-in-law, two sons-in law, six grandchildren and two great grandchildren. A private memorial service will be held at a later date.

Donations in Barbara’s memory may be made to the Church of the Beatitudes, 555 W. Glendale Avenue, Phoenix, AZ  85021.

Offer Hugs From Home Condolence for the family of CLELLAND, BARBARA BURRALL