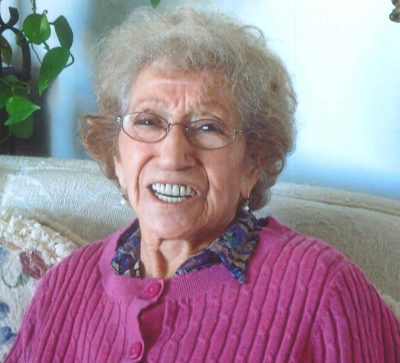 95, passed away on Friday, December 30, 2016 surrounded by her loving family in Phoenix, Arizona. She was born on December 8, 1921 in Phoenix, Arizona as a third generation Phoenician. Hope was preceded in death by her loving husband of 76 years, Joe Coassolo; her parents, Ralph and Antonia Fierros; three brothers and four sisters; and her granddaughter Yonna Coassolo. Hope is survived by her three wonderful children, daughter Emily Viliborghi, sons Dan (Grace) Coassolo of Idaho and Johnny Coassolo. Hope had six grandchildren whom she adored; Elana Viliborghi, Jeffery Viliborghi, Phillip Coassolo (Ida), Johnny Coassolo (Julie) of Idaho, Lisa Salaontai (Andy) of California and Joey Coassolo (Bridget). She had five great-grandchildren; Elena, Joe, Eric, Garrett and Peyton. She is also survived by two brothers and two sisters. Hope retired from Motorola after 20 years of employment. She and Joe volunteered from 1988 to 2001 at Westfork for the Sitgreaves National Forest as campground hosts in their beloved White Mountains. Hope will be dearly missed by numerous nieces and nephews and many, many friends. Visitation will be held on Saturday, January 7, 2017 at St. Agnes Catholic Church, 1954 N. 24th St., Phoenix, at 8:30 A.M., followed by Funeral Mass at 9:30 A.M. Interment will be at St. Francis Catholic Cemetery. In lieu of flowers, the family asks that donations be made in Esperanza’s name to the Season’s Hospice at 2020 N. Central Ave., Suite 170, Phoenix, Arizona 85004. Arrangements entrusted to Whitney & Murphy Funeral Home.

Offer Hugs From Home Condolence for the family of COASSOLO, ESPERANZA FIERROS