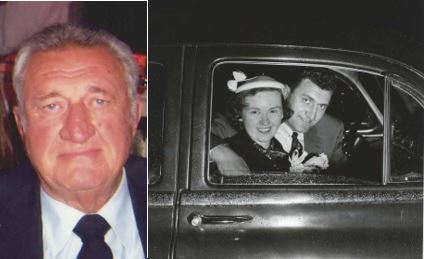 Donald Richard Colo, born on January 5, 1925, passed away peacefully at his home with his family by his side on June 23, 2019. The son of Josephine and Virgilio Colo, Don was born in East Bridgewater, Massachusetts.
At 18 years old, on July 1, 1943, Don joined the U.S. Navy. He would serve his beloved country honorably, including serving on the U.S.S. Samuels S. Miles in the Southern Pacific during World War II.
Upon concluding his military service, Don enrolled in Brown University. Having never picked up a football before, Don tried out for the football team. Neither Don nor his family would have predicted that picking up a football that day would lead to nine seasons in the National Football League (NFL) and an induction into the Cleveland Browns Ring of Honor.
While in the NFL, Don played defensive tackle for the Baltimore Colts, New York Yanks, Dallas Texans, and five years with his cherished Cleveland Browns. A 3-time Pro-Bowler, Don’s football days came to an end in 1958, but his love of the game and the Browns lived on.
During his time with the Browns, football legend Lou Groza and his wife Jackie arranged a blind date for Don that would lead him to the love of his life, Prudence Henderson. After 64 years of marriage, Prudence was by Don’s side when he passed, along with other family members.
Don’s gregarious personality, abundance of stories, poetry, and his love of food and beer will be missed by all who knew and loved him. He was a prince among men whose kind, patient ways will be forever remembered.
Don’s family is grateful for the tremendous care he received from his doctors and caretakers, including Dr. Simonie and Hospice of the Valley.
Services will be held by the family and will be private. To honor Don’s memory, donations can be made to Canine Companions for Independence at 124 Rancho Del Oro Drive, Oceanside, CA 92057.

Offer Hugs From Home Condolence for the family of COLO, DONALD RICHARD