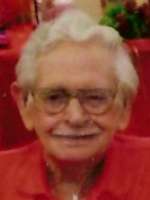 85, passed away peacefully, on May 27, 2010, at Banner Good Samaritan Hospital, choosing the celebration in heaven over the pain of a lingering illness. Mr. Conkle was born in Childress, Texas, on October 7, 1924, to Jack and Rita Conkle. His family was among the many migrant workers during the dust bowl days who traveled the country to make a living. He served honorably in the US Navy during World War II. Upon his discharge he moved his family to Hobbs, NM where he began working in the oil fields as a roustabout. Because of the danger of rig climbing and tank monitoring, Mr. Conkle decided to learn a different trade and became a metal-worker and plumber. He started his own successful plumbing and heating business, T & M Plumbing, in Las Vegas, NM, in 1965, which was taken over when he retired by his son, Marc. Mr. Conkle was a respected businessman who was active in his church, at one point serving as interim pastor for a year. He loved the Lord and lived his life in the joy of knowing God is ever-present. Among his many interest was the New Mexico Mounted Patrol where he served in an active volunteer capacity for many years. Mr. Conkle had a kind word for everyone and was always willing to lend a hand. He could make homemade kites that really flew, knew how to count the stars, could build a straggle mouth ploogie and taught all there was to know about integrity simply by living it every day. He worked hard all his life and believed a man must be worthy of his hire. He was a beloved father, grandfather, son, brother, uncle, and friend. Mr. Conkle loved living at the Arizona Grand where he and Mrs. Conkle enjoyed the social interaction and friendships they established among the other residents. Mr. Conkle is survived by his loving wife, Virginia, of the family home, and children Sharon Vander Meer and her husband Bob, Marc Conkle and his wife, Lisa, Patty Conkle, Melissa Lucero and her husband Fred, of Las Vegas, NM; Dusty Bledsoe, Doll Brown and her husband, Ken, of Phoenix, AZ, Norma Lowas and her husband, Larry, of Navarre, FL, Butch Northrop and wife Barbara, of Surprise, AZ, and grandchildren Charles Bittinger, of Albuquerque, NM, Seth Conkle and Stefan Conkle of Las Vegas, NM, and Audrey Gregory and her husband Devin of Las Cruces, NM. Many extended family members from his marriage to Virginia also survive him. He is also survived by his brother, Gordon Conkle, of Coos Bay, OR, and several nieces and nephews. He is preceded in death by his mother and father, Jack and Rita Conkle, his brother, Wayne, and by his first wife, Mona, and their son Don. A Memorial Service will be held for Mr. Conkle at the Arizona Grand, 4602 N 24th Street, Saturday, May 29, 2010 at 10 a.m. Visitation at Whitney & Murphy Funeral Home, 4800 E. Indian School Road, will be from 3 to 5:30 p.m. on, Saturday, May 29, followed by a Funeral Service at 5:30 p.m. Mr. Conkle will be interred in Las Vegas, NM.

Offer Hugs From Home Condolence for the family of CONKLE, Tommy Jefferson