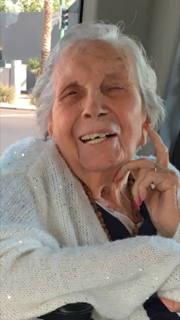 Virginia was born February 3, 1915 in Globe, Arizona. Her proud parents, Father; Edward W. Hargett, Mother; Mary F. Hargett. They lived on a homestead in Six Shooter Canyon in Globe. She had quite a few older brothers and sisters and soon thereafter, there were two younger brothers born. She had a happy childhood. She learned to play the piano quite young and when they would have visitor’s her father would ask her to play the piano for them. She had 5 brothers and 6 sisters who preceded her in death. She was married to Chesley “Chet” A. Northrop in 1936 in Lordsberg, New Mexico. They were happily married for 46 years, he passed away in 1982. They had 4 children, Virginia H. Brown (Dolly), in Phoenix, Chesley A. Northrop Jr. (Sonny), in Surprise, Chet and her decided to change her nickname to Butch after she got a little older; Cheslene Bledsoe, in Goodyear and Norma Lee Lowas, in Florida. She had 18 grand-children, 20 great-grandchildren and 17 great-great grandchildren. She remarried in 1986 to Tommy J. Conkle. He passed away in 2010, they had no children. A Visitation will be held on Saturday, July 14, 2018 at 9:00 A.M. at Whitney & Murphy Funeral Home, 4800 E. Indian School Road in Phoenix with the Scripture Service beginning at 10:00 A.M. Condolences may be expressed at www.whitneymurphyfuneralhome.com

Offer Hugs From Home Condolence for the family of CONKLE, VIRGINIA NORTHROP