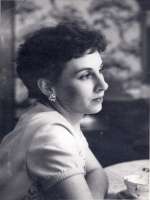 Judi Conti passed away on October 29, 2010. Born May 5, 1935 to Marie and Joseph
Christman, Judi grew up in Ridgewood, NJ, and moved to Arizona with her husband Victor and their two daughters. Once her children were older, Judi returned to school and obtained her bachelor’s degree from NAU. She additionally completed nursing school becoming an LPN. She enjoyed a distinguished career as the Director of Santa Maria Adult Day Health Care where she was able to touch many lives with her loving care, kindness, and humor. Judi was filled with a vibrancy and love of life. Judi’s many hobbies included art, music, the piano and singing. She was known as an excellent cook and delighted in making special dishes for family and friends. She was also a devoted lover of animals. Judi was predeceased by her husband, Victor. She will be eternally missed by her daughters Alyce (Clay Laidig) and Valerie (Darin Bourgeois). Judi was elated to become a grandmother to Victoria with whom she spent many hours filled with joy and laughter. She was eagerly awaiting the birth of a second granddaughter. She is survived by her brother, Robert Christman, and by her sisters, Ann Peters, Jennifer Sheppard, and Irene Hempstead, and predeceased by her sister Susan. She will be greatly missed by her family, including many nieces and nephews, and by her many friends. Funeral Service will be held at Whitney & Murphy Funeral Home, 4800 E. Indian School Road, Phoenix on Wednesday, November 3, 2010 at 12:30PM. In lieu of flowers donations may be made to The Salvation Army.

Offer Hugs From Home Condolence for the family of CONTI, JUDI