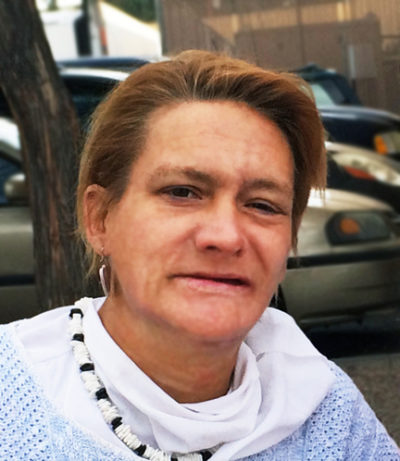 Katherine Grace Cook, 41, went to our Lord on Wednesday, December 28, 2016. Born December 1, 1975 in Laramie WY, she was adopted by Pete and Marilyn Cook of Cheyenne WY. An Air Force family, they moved to Mesa and San Antonio before settling permanently in Phoenix. Kathy was active in gymnastics in her early years, and graduated from Red Mountain High School after serving as president of her junior class. She later served as a peer counselor, did artwork and attended rehabilitation classes during a long struggle with substance problems. She is survived by her brother James Cook of Fredericksburg, VA and her four daughters, Mackenzie, Elizabeth, and Ashley Forga of Colorado, and Rae Rich of Phoenix. A visitation will be held at 10:00 A.M. Wednesday, January 4, at Whitney & Murphy Funeral Home, 4800 East Indian School Road, Phoenix, with an interment ceremony to be held at Holy Redeemer Cemetery at a future date. The family would like to thank Southwest Network, 2700 N. Central Avenue, Suite 1050, Phoenix AZ 85004, for the many years of assistance they provided Kathy at their Saguaro behavioral health center.

Offer Hugs From Home Condolence for the family of COOK, KATHERINE GRACE “KATHY”