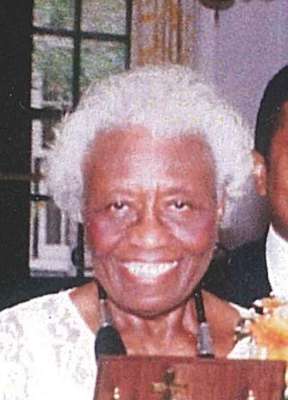 Early in life, she learned about church participation from her parents. Her Dad, James was an officer and her Mom sang in the choir in the Guildfield Missionary Baptist Church in Gregory. Virginia graduated from elementary school in Gregory’s one-room school house where her father, who also was a share cropper, taught. She attended and graduated 12th grade at Brinkley Academy residential school in Brinkley, AK.

Virginia loved music and was a member of the Brinkley Academy Choral Group that sang in churches throughout the south to collect funds, canned good and other supplies necessary to maintain the school operations. She attended Philander Smith College in Little Rock, AK and graduated from Tucker Business College in St. Louis, MO, where she later because a teacher.   She also received a degree in Social Work from Southern Illinois University.

In 1937, Virginia married Clarence Johnson, father of 6-year-old Opharitta. During WWII she and Clarence worked at the ammunition plant in St. Louis. They migrated to St. Louis, MO and in 1961, Clarence died suddenly of a heart attack. After the war, she was a clerk at the military finance center (formerly the ammunition plant) until it split and relocated in Indiana, Cleveland, OH and Denver, CO.

She then worked as a Social Worker for the Division of Family Services for the State of Missouri until retirement in 1983. Finally, after retirement, she became a clerk/secretary at the West Side Baptist Church in St. Louis, MO retiring 19 years later to care for her 2nd husband, Teoffice Cooper who died in May 1986. He had 3 teenagers; 2 daughters, Deede and Chris and a son, Teoffice, Jr.

Virginia relocated to AZ in 2001 at age 85 to be cared for by her step-daughter Opharitta and her children. She joined the Baptist Church briefly and then joined and attended the South Minster Presbyterian Church until she was no longer able to do so.

Contributions may be made to Hospice of the Valley, 1510 N. Flower Street, Phoenix, AZ 85014 in Virginia’s name.

Offer Hugs From Home Condolence for the family of COOPER, VIRGINIA J.