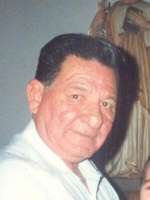 77, of Glendale, AZ passed away
on February 17, 2012. George
was born in Phoenix, AZ on
February 22, 1934. George served
in the U.S. Army and is a Korean
War Veteran. He is preceded in death by his mother and
father, Maria and Doroteo, daughter Patricia Ann Cota,
Doroteo, Jr., Martha and Frank. He is survived by his
companion of 21 years Emilia Barnett, sister Nadeline Cota
Valdez, son George Cota, Jr. (daughter-in-law Tillie Cota),
daughter Evett Cota, 7 grandchildren, 1 great granddaughter
(Serenity Cota) and several nieces and nephews. George
would selflessly do anything for anybody with love and
patients. He will be greatly missed by all. Visitation will be
held from 9:30-10:30am, with a Funeral Service at 10:30am,
Friday, February 24 at Whitney & Murphy Funeral Home,
4800 E. Indian School Road. Interment will follow at St.
Francis Cemetery.

Offer Hugs From Home Condolence for the family of COTA, GEORGE ENCISO