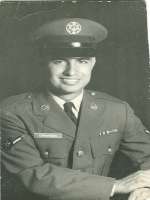 peacefully passed away on February 4th, 2010 after a long illness surrounded by his loving family. David was born in Phoenix, AZ on July 8th, 1943. He proudly served in the United States Air Force during the Vietnam War. After receiving an honorable discharge he returned to Arizona State University and received a BA degree so he could become a teacher. He later earned a Masters Degree and continued teaching for 26 years. As a young man he earned many medals in track and field and enjoyed coaching later in life. He also enjoyed family, all sports, western novels, gardening and his dogs. David is preceded in death by his father Hipolito and mothers Esther Covarrubias and Anita Covarrubias. Survived by his loving wife of 40 years Teresa; children Michael, Melissa (fiancé Tyeson), Mark, Matthew and sister Susana Sesma and brothers Johnny, Gilbert (Star), Roy (Ana), Reynaldo (Cathy) and numerous nieces, nephews and grandnieces and grandnephews and grand dogs. A Visitation will be held from 4:00-6:30 pm, with a Rosary at 6:30 pm, Thursday, February 11, 2010 at Whitney & Murphy Funeral Home, 4800 E. Indian School Road, Phoenix. Funeral Mass will be at 11:00 am, Friday, February 12, 2010 at St. Gregory Catholic Church, 3424 N. 18th Avenue. Interment will follow at the National Memorial Cemetery of AZ. Family suggests donations to Donor Network of Arizona in lieu of flowers. Please sign guest book at www.whitneymurphyfuneralhome.com

Offer Hugs From Home Condolence for the family of COVARRUBIAS, DAVID