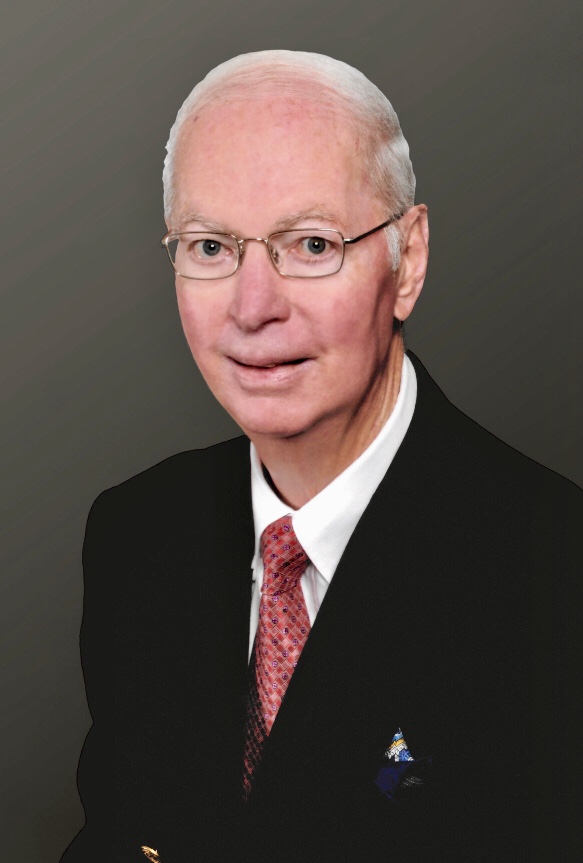 Robert W. Cox, a loyal son of Notre Dame, passed away on March 5, 2018, from complications arising from Parkinson’s disease. Bob was born on August 9, 1937 in Carlinville, Macoupin County, Illinois to Robert Nelson Cox and Dorothy June (Novotney) Cox. Survivors include Patricia Jane (Owens) Cox, his devoted and loving wife of 55 years, his four children, Robert A. Cox and his wife Maria (Suarez) Cox, Mary Pat Cox, Christine (Cox) Murray and her husband Paul Murray, and Michael W. Cox and his wife Brenda Hull; and 10 grandchildren, Elena Cox, Owen Cox, Collins Cox, Micaela Cox, Patrick Murray, Kevin Murray, John Murray, Caitlin Murray, Ella Cox and Liam Cox. He is survived by one sister, Mary Lynn (Cox) Green. A funeral mass and celebration of Bob’s life will be held on Friday April 13, 2018, at 10:00 A.M. at the Conventual Church of Our Lady of the Angels at the Franciscan Renewal Center, 5802 E. Lincoln Drive, Paradise Valley, Arizona. Bob was global chair of Baker & McKenzie law firm, an active member of the University of Notre Dame Law School Advisory Council, serving from 1983 until his passing in 2018 including 11 years as chair, and a member of the board of directors of Scottsdale Healthcare Corporation (now known as HonorHealth) including a term as chair. He was an active member of his parish and a member of the Knights of Malta. Bob loved spending time with family and friends, traveling the world with Pat, collecting and dealing southwestern art, fly fishing, white water rafting, hiking, golfing at Ardsley Country Club, and Desert Mountain, playing and coaching basketball, watching and attending Notre Dame football games and Chicago Cubs baseball games. That he lived to see the Cubs win the World Series in 2016 was a special moment for Bob, along with all other long-suffering Cubs fans. He was an accomplished singer and pianist who crooned in lounges and clubs in Chicago, South Bend and New York City. As a young man, Bob was an Eagle Scout, he attended the 1953 Boy Scouts International Jamboree at Irvine Ranch, California. Bob attended the University of Notre Dame at South Bend, Indiana on a full scholarship. He graduated with a B.S. with Honors in Commerce from Notre Dame in 1959 and with a J.D. with Honors from Notre Dame Law School in 1962. Bob moved to Washington, DC, took a position in the Office of the General Counsel of the U.S. Securities and Exchange Commission, and married Patricia Owens. Bob was hired as an associate by Baker & McKenzie in their New York office in 1966, named a partner in 1969, and elected the firm’s first-ever full-time global chair in 1984. After eight years, as the longest serving chair in the history of the firm Bob stepped down as chair in 1992 and retired from the firm in 1994. While running the largest law firm in the world, Bob continued to serve on the Notre Dame Law Advisory Council, worked with Chicago’s Cardinal Joseph Bernadin raising money for the Archdiocese of Chicago’s Big Shoulders Fund and was the founding chair of Chicago’s International Press Center. With his children grown and his time with Baker & McKenzie at an end, Bob left Chicago, and relocated to the western United States with Pat. The couple first settled in Keystone, Colorado. Bob served on the board of trustees of Crow Canyon Archaeological Center. Bob and Pat acquired a second home at Desert Mountain. The couple relocated to Arizona on a year-round basis in 1999. After retirement from his law career, Cox began three new careers: serving on corporate and non-profit advisory boards, working in medical management and working as a dealer of southwestern art. Bob served on the board of directors of Hon Industries, Carey International and House2Home. He served on commissions of the Center for Strategic & International Studies. He served on the board of directors of Scottsdale Healthcare Corporation (now HonorHealth) including a term as chair. Bob partnered with a local gallery to represent Allen Houser, a Chiricahua Apache, in Arizona. Bob was a consummate listener and problem solver, willing to help family and friends in any way. His wife, family and friends were the focus of his life. While his many accomplishments speak to his professional achievements, it is those who survive him, his former colleagues, friends and family that attest to his success of being a treasured husband, father, grandfather, friend, brother, son, and friend. He was loved and he will be missed. In lieu of flowers, the family requests that contributions be made to Hospice of the Valley Fund Development, 1510 E. Flower Street, Phoenix, AZ 85014. Bob’s cremated remains will be interred at Our Lady of Sorrows at Cedar Grove Cemetery during the football season on the campus of the University of Notre Dame in September 2018.

Offer Hugs From Home Condolence for the family of COX, ROBERT W.