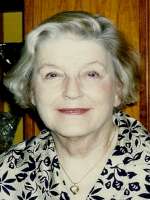 88, passed away March 1, 2013 at Hospice of the Valley Dobson House. Born in Phoenix on September 3, 1924, Jean was the only granddaughter of early Phoenix pioneers, George H.N. and Catherina Luhrs, who emigrated from Germany in the mid 1800’s and later built the Luhrs Properties in down town Phoenix. Jean attended Stanford University from 1944- 1953, where she met her husband Milton. They were married on September 16, 1961. After raising her family, she returned to school to learn computer languages and taught at PVCC. She was very involved in the community, as a member of P.E.O. for 70 years, First Families of Arizona, National Society of Arts and Letters and A.C.L.D.  Jean is survived by her husband, Milton, son, Matthew, daughter, Gretchen (Michael) and granddaughters Mia and Emma.  The family would like to express their gratitude to Jean’s team at Hospice of the Valley and the staff at Dobson House.  A Memorial Service will be held at 10:00 am Friday March 15, 2013 at Trinity Cathedral 100 W. Roosevelt, Phoenix, AZ.  In lieu of flowers, donations may be made to the American Diabetes Association of Arizona 5333 N. 7th St. #B212 Phoenix, AZ.   85014.  Arrangements entrusted to Whitney & Murphy Funeral Home and Post Scripts by Posey.

Offer Hugs From Home Condolence for the family of CRANE, JEAN STROUD EMBACH