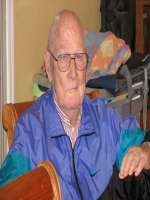 Jack L. Crawford, 90, of Chandler AZ passed away peacefully on November 23, 2011. Jack was a loving husband, father and grandfather and will always be remembered for his quick wit and clever sense of humor. He was born in LaPorte City, Iowa on November 17, 1921, the son of Clarence and Jesse Ochs Crawford. Jack graduated from Jesup High School, was in the Navy during WWII and attended Iowa State University, taking engineering courses. Jack married Grace Herrmann on August 22, 1946. After several years living and working in Iowa, they moved to Phoenix, Arizona in 1956 where Jack secured a job at Garrett Aviation. Jack continued working for Garrett until 1987, retiring as a Master Design Engineer. During his time in Arizona, Jack enjoyed working on his 7.7 acre Pecan farm in West Phoenix until 1993 when they sold the property and moved to Chandler. He is survived by his wife Grace, daughter Tina Lansburg (David), grandson, Jared and sister Mary Sewell of Waterloo, IA. He was preceded in death by his parents, his daughter, Carla Jo, brothers, Donald H. Crawford and Robert Crawford and sisters Joan Annett and Margaret Stewart. Funeral Service will be held at 12:00 noon, on Friday, December 2 at Whitney & Murphy Funeral Home, 4800 E. Indian School Road. Inurnment will take place at 2:00pm, Friday, December 2 at National Memorial Cemetery of AZ, 23029 N. Cave Creek Road, Phoenix. In lieu of flowers, the family has requested donations to be made to The Salvation Army or Hospice of the Valley.

Offer Hugs From Home Condolence for the family of CRAWFORD, JACK LEROY