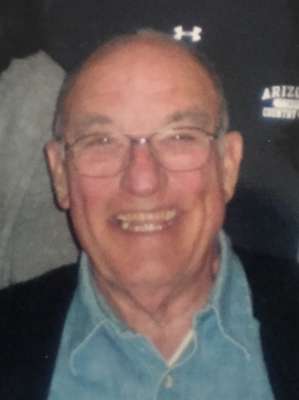 James Barry Crowley died peacefully on Monday night at his home surrounded by his family. Jim was a strong person with undying integrity who lived his values of honesty and morality without compromise and always guided by his Catholic faith.  Jim was born on December 1, 1930 to William Patrick Crowley and Helen McDonald Crowley in St. Louis, Missouri, where he attended St. Louis University High School.  He started at St. Louis University, but his college career was interrupted by the Korean War.  He served in the U.S. Air Force as Airman First Class in the Strategic Air Command in Fairbanks, Alaska.  He returned to earn his degree in Business Administration from the University of Missouri.  Jim became President of the Unit Masonry Association in St. Louis.  In 1956, he met Patricia Ploussard, the love of his life.  Three years later, they moved to Phoenix and were married.  In 1962, Jim founded Crowley Construction Company, which remains a successful family enterprise that, among other things, has kept generations of Crowleys duly employed during their summer breaks. In 2014, Jim handed the keys to his company over to his son, Dan, who has carried on his Dad’s tradition of excellent and ethical service.  Jim was preceded in death by his parents and his brother, William P. Crowley, Jr. and his son, Michael K. Crowley.  He is survived by his wife, Patricia, his children Jim Crowley (Lana), Erynn Crowley (wife of Michael Crowley), Peggy Khan (Bob), Karen Tejada (Tim), Donna Schmidt, Dan Crowley (Jennifer) and 14 beautiful grandchildren.  Visitation/Rosary will be held on Saturday, October 1, 2016 from 9:00-10:00am at Whitney & Murphy Funeral Home, 4800 E. Indian School Road.  Funeral Mass will be celebrated on Saturday, October 1 at 10:30am at Saint Theresa Catholic Church, 5045 E. Thomas Road.  The family asks that, in lieu of flowers, contributions please be made to St. Vincent de Paul, 1730 E. Monroe Street, Phoenix, AZ 85034 or svdpusa.org.

Offer Hugs From Home Condolence for the family of CROWLEY, JAMES BARRY “JIM”