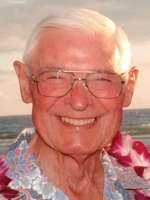 Dorrance E. (Dick) Cruikshank passed away in his sleep the morning of December 27, 2012.  Dorrance, the son of Martin and Grace Cruikshank, was born in Delaware, Ohio November 14, 1921.  He graduated from Delaware High School and served in the Army Air Corps in the South Pacific Theater during World War II.  After the war he attended Arizona State College graduating in 1949.   He started working part time for Valley National Bank in 1947 and then full time after graduation.  In 1952 he moved to San Francisco, California to work in the Office of the Comptroller of Federal Reserve District.  After several years in California he decided he would prefer to live in the Valley of the Sun and returned to Phoenix.  He rejoined Valley National Bank in 1958 to work in Credit Administration.  He held several different positions in the credit area.  After retiring from the Bank in 1984 he became associated with Laughlin Recreational Enterprises and helped organize the Laughlin National Bank in Laughlin, Nevada and served as a Director until the Bank was sold in 1997.  Also, after retiring he became associated with Shuck & Sons Construction Co. serving as an Officer and Director until 2004.  He was preceded in death by Moyra (Mo) his wonderful, loving wife for 37 great years and is survived by his caring daughter Mary Frances Cruikshank-Springer.  A Memorial Gathering will be held at 11 a.m. on Saturday, January 5, 2013, at Whitney & Murphy Funeral Home, 4800 East Indian School Road, Phoenix. In lieu of flowers contributions may be made to the Make A Wish Foundation, 711 East Northern Avenue,
Phoenix, Arizona 85020, and the Arizona Humane Society, 9226 North 13 Avenue, Phoenix, Arizona 85021.

Offer Hugs From Home Condolence for the family of CRUIKSHANK, DORRANCE E. (DICK)