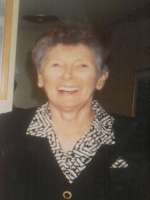 Delia Cullen was born January 9, 1929 on the family farm in Barna, just outside of Galway Ireland. She was the youngest of 12 children born to Bartley and Kate Keane. Delia passed away on February 21st, 2012 in Sacramento, CA. At the age of 24 she moved to New York to join her three sisters who had immigrated a few years earlier. While living in the Bronx, she met Jim Cullen whose family lived in the same apartment building in the Bronx. They were married in 1954 and, together started their life full of children, travel, and interesting adventures.

After their marriage, they left the “neighborhood”, moved to the Westfield N.J. and started their family. Within 5 years, they had 4 children and a busy life. With 4 children, and a husband commuting to NY each day, Delia finally had to learn to drive, and she thus began a 20+ year period of constantly shuttling children to an endless string of school and sports activities.

In 1969, Jim was transferred to Memphis TN, and then 3 years later to Phoenix, which Delia ultimately called her true home. Delia rolled with each move, leaving her friends, packing the house, finding new schools, finding new friends and never complaining. No matter what the location, the house was always open and welcoming to everyone. She cooked many late night meals for 10-20 at a time, and did so laughing with the kids. Delia made friends wherever she went…and her distinctive Irish brogue helped start more than a few conversations, but it was Delia’s compassion, sense of humor and positive attitude that made her presence contagious.

Her children all graduated from high school in the Phoenix area with Patricia (Parce) and Theresa (Terry) from Arcadia in’73,’74, then Brian and Tom from Brophy in ’76, ’77.

Delia is preceded in death by her husband James Raymond Cullen and her daughter Theresa Wood. She is survived by her sister Margret Keane, her daughter Parce Huber (Tim), sons Brian Cullen (Tracey) and Tom Cullen (Stacy), son-in-law Wes Wood and eight grandchildren: Kelsey and Hayden Cullen, Kevin and Tom Huber, Megan and Kacey Wood and Patrick and Danny Cullen. Visitation will be held from 4-6pm, Sunday, February 26, at Whitney & Murphy Funeral Home, 4800 E. Indian School Road. A Funeral Mass will be held at Brophy Chapel on Monday, February 27th, 2012 at 10:30 AM. Interment will follow at St Francis Cemetery. Donations may be made to the St. Francis Building Fund, 4715 N. Central Avenue, Phoenix, 85012

Offer Hugs From Home Condolence for the family of CULLEN, DELIA ANN