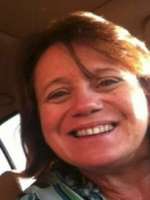 Deb was taken from us suddenly on October 3, 2013. She is preceded in death by her mother Sharon Morrison, grandparents Amma and Humpa, and survived by her daughter Heather, sisters Jeri, Donna and Iwa, brothers Robert, Jim, Shawn and Jordan, and her father Robert, Aunt Patty, Uncle Doug and 17 nieces and nephews.  Debora was born September 30, 1965 in Pasadena, CA.  From early childhood she lived in Fallon, Nevada and graduated from Churchill County High School in 1983. Deb had a celebrated career with American Express for 23 years most recently as a Business Systems Analyst.  She has touched many lives with her bright smile, fun spirit, and unique burst of laughter. Deb had a full of life personality and she always lit up a room.  She will be deeply missed.  A Memorial Service will be held at 11:00am, on Friday, October 11, 2013 at Whitney & Murphy Funeral Home, 4800 E. Indian School Road, Phoenix.  In lieu of flowers donations can be made in her name to the National Multiple Sclerosis Society.

Offer Hugs From Home Condolence for the family of CUNNINGHAM, DEBORA MARIE