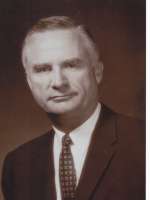 Joseph Oliver Cunningham, 94, died Friday, September 13, 2013 at his home in Phoenix, Arizona. He was born in Boston, Massachusetts on October 23, 1918, son of the late Charles Frederick and Gertrude Wells Oliver Cunningham and grew up at the family home in South Bend, Indiana. He attended St. Paul’s School in Concord, New Hampshire and The Lawrenceville School in New Jersey. In 1942, he graduated from Harvard with a Bachelor of Science degree and later attended Harvard Business School.

He served as an officer in the United States Navy during World War II. After the war, he joined The Oliver Corporation in Chicago, a firm which was originally founded by his great grandfather James Oliver in 1855. In 1953, he transferred to Memphis, Tennessee as Manager of the Memphis Branch, and in 1956, he purchased the Electrical Equipment of Arizona, a wholesale distributor of home appliances, where he served as President and CEO. He was on the Board of Directors of The First National Bank of Arizona, later known as First Interstate Bank of Arizona. He also served as Chairman of the Board of the National Bank and Trust Company of South Bend. From 1970 until his death he served as Chairman of the Board of Oliver Estate, Inc. He was a supporter of Notre Dame and served on the University of Notre Dame College of Business Advisory Council. In the 60’s he served as Campaign Chairman for the annual fundraising event of the Greater Phoenix United Way and also served on Arizona Governor Samuel Goddard’s Advisory Council. In 1997 Governors of Indiana awarded him the Sagamore of the Wabash award and in 2004 the Distinguished Hoosier Award for his many contributions to the State of Indiana and the South Bend/Mishawaka community. As an avid pilot he enjoyed flying his own airplane; was a staunch supporter of sports and could be seen so often in his box watching and cheering on the Notre Dame Fighting Irish. He was always ready for a good game of tennis.

Services for immediate family and close friends will be held at 2:00 p.m., Monday, September 23, 2013 at Copshaholm, 808 West Washington Street, South Bend, with burial at the Oliver Mausoleum at Riverview Cemetery. Memorials may be made to your favorite charity, or to the Northern Indiana Historical Society of South Bend, Office at Copshaholm, 808 West Washington Street, South Bend, Indiana 46601 or to the Mendoza College of Business at Notre Dame the University of Notre Dame, Notre Dame, Indiana 46556.

Offer Hugs From Home Condolence for the family of CUNNINGHAM, JOSEPH OLIVER