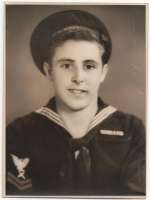 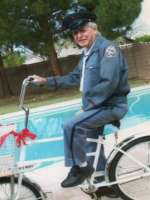 George Lincoln Curran was born February 12, 1923 in Oakland, CA and at the age of 89, passed from this world April 28th, 2012 due to a brief, courageous battle with pancreatic cancer. Dad, you had a very exciting life and just like you wanted, you never had to retire from being a mail carrier for the past 45 years at the Post Office! Left behind to cherish all the wonderful memories are Sally, the love of his life for 61 years; loving son, Ross; adoring daughter, Margi and son-in-law, Tom. We also wish to acknowledge Dad’s second family – all the postal workers from the Indian School Station who were so important to Dad. Dad was in the US Navy in World War II and was on the USS Pillsbury. He was part of the crew that captured the first German submarine that now resides in the Museum of Science and Industry in Chicago. He and his shipmates received the Presidential Citation among other awards for service. Dad was also an amateur lightweight boxer, fighting under the name of “Kid Irish”. He taught his children to never back down once you engage your opponent and how to throw a punch when needed. Dad put family above all else and was often heard to say “just don’t upset your mother”. For Dad, it was family, honesty, hard work, and oh yes, taking Sally to the casino! He was a lucky man and we were so lucky to have had him in our lives. Thank you to all the wonderful nurses (especially Jackie), staff, and caregivers from Hospice of the Valley who helped all of us through the last few weeks. Services were private. In lieu of flowers, donations can be made to Hospice of the Valley at 1510 E. Flower Street, Phoenix, AZ 85014, or online at http://www.hov.org/donations.aspx. As we had talked about Daddy, this is not good-bye. You simply went on ahead, so wait for us in the lobby.

Offer Hugs From Home Condolence for the family of CURRAN, GEORGE LINCOLN