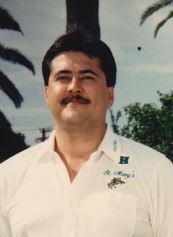 John Czepowski, 68, passed away on Monday, January 31, 2022 in Mesa, Arizona. He was born on September 18, 1953, in Agua Prieta, Sonora, Mexico. He is the son of Ray and Ruth Czepowski, both of whom are now deceased.
He is the proud father of two daughters: Katie & Julianna Czepowski. John was a graduate of Saint Agnes Elementary (1967), Saint Mary’s High School (1971) and Arizona State University (2003).
While attending St. Mary’s, John played four years of football, a game for which he had great passion and that eventually motivated him to return to his alma mater as an assistant coach where he successfully served for over 20 years. Then in 1995, when John was the varsity line coach, after so many years in the game that he so loved, St. Mary’s won the State Championship!
While John pursued his bachelor’s degree from Arizona State University, he also worked as a bartender at the Observatory in Phoenix and later as a youth counselor with Maricopa County Human Services.
Then in 2003, after his college graduation, he moved to Iowa, to be closer to his daughters. In West Des Moines, he worked at Valley High School as a Special Education Associate and also a volunteer football coach. John later recounted that one of his proudest moments was when in 2011, VHS was awarded “Class 4A State Football Champions.”
John was a devoted father and loved nothing more than his daughters. No matter what sport or activity they were in, he would always be there on the sidelines cheering them on. In his free time, John also enjoyed cooking and gardening and had a great love for all animals. After enduring several medical issues, John returned to Arizona in 2019.
John had many uncles and aunts, none of which are now living; however, he does leave behind many cousins, colleagues, dear friends and his most faithful-to-the-end friend and companion, Alice Smith. A special thanks to family and friends for loving him, being there for him, and comforting him until the very end.
John’s closest survivors include: his two sisters Lala Bence of San Diego and Marta Lalliss of Mesa; brothers-in-law: Jim Bence and Keith Lalliss; a niece, Aimee Mitten of Mesa, and nephews: Joe and Jeffrey Bence of San Diego.
A memorial service to celebrate John’s life will be held in Phoenix at Whitney & Murphy Funeral Home, 4800 East Indian School Road, on Saturday, February 26, 2022 at 10:00 A.M. Condolences may be expressed at www.whitneymurphyfuneralhome.com

Offer Hugs From Home Condolence for the family of CZEPOWSKI, JOHN