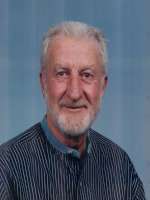 81, of Phoenix, passed on to the Lord on May 17, 2013.  Lou was born on March 17, 1932 to immigrant Italian parents in Rockford, IL., where he attended elementary school, high school and Illinois Wesleyan University.  Lou and Priscilla Johnson were married in August 1951 in Rockford and brought seven children into their loving and caring arms.  Lou spent his life in the construction industry starting as a tradesman, then as a salesman and finally as the head of his granite, stone and marble company in Peoria, IL., Houston, TX and Phoenix.  Lou was extremely active in business and educational associations throughout his career.  Besides his love of The Lord, Lou took great pride in the time he spent with Cursillo, TEC and Prison Ministry in the Catholic communities of Illinois, Texas and Arizona.  In 2002 Lou finally retired in Phoenix and in 2004 Lou met and married the second love of his life, Barbara (B.J.).  Lou is preceded in death by his parents, sister Clorinda, brother Roy and first wife Priscilla.  He is survived by his wife Barbara (B.J.), sister-in-law Sheila Keyser (Rick), sons Brian (Maggie), Christopher (Connie), Otto, David (Pamela) and daughters Celeste (Ken) Swank, Clorinda D’Agnolo and Dianne D’Agnolo.  Fourteen grandchildren, Sean, Laura, Paul, Jayme, Nicole, Kim, Candace, Joshua, Jayde, Karina, Kelsey, Kristian, Lauren and Nicholas.  One great-granddaughter Allyson and another great-granddaughter and grandson expected this year.  Lou also leaves behind a nephew, three nieces and many dear extended family members, close friends and golfing buddies.  His humor and warmth will be greatly missed by all who knew him.  A visitation will be held on Wednesday, May 22, 2013 from 5:00-7:00 P.M., at Whitney & Murphy Funeral Home, 4800 E. Indian School Rd., Phoenix.  There will be a Funeral Mass on Thursday, May 23, 2013 at 10:00 A.M., at St. Theresa Catholic Church, 5045 E. Thomas Rd., Phoenix.    A Memorial Mass will be celebrated at St. Thomas Church in Peoria Heights, IL in early June followed by interment at Ressurection Mausoleum.  In lieu of flowers donations may be made in Lou’s honor to Cursillos/TEC Program, 401 N. E. Madison, Peoria, IL  61603 or The North Phoenix Kidney Dialysis Center, 1957 W. Dunlap Ave., Suite 6C, Phoenix, AZ  85021

Offer Hugs From Home Condolence for the family of D’AGNOLO, LOUIS (LOU) A.