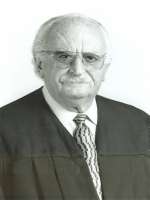 Judge Peter T. D’Angelo (ret.) died peacefully at his home on Saturday, May 14, 2011. He was comforted in his final days by the presence of his wife and children.

Judge D’Angelo was born in San Diego, CA on September 9, 1931 to Guilia and Angelo D’Angelo. He graduated from Loyola University in Los Angeles in 1951. He served as an officer in the U.S. Air Force. Judge D’Angelo received his Bachelor of Laws Degree from the University of Arizona College of Law in 1957.
The Judge served for two years as a Deputy County Attorney, then entered private practice for some 24 years. In August 1982, he was appointed as a Maricopa County Superior Court Judge.
During his judicial career he presided over Civil, Criminal and Family Law matters. He was one of those judges all litigants wanted to appear before, which is a high compliment for a judge. He retired from the bench in 2000 after 18 years of service.
Judge D’Angelo was a founding member of the Arizona Bar Foundation, Past President of the St. Thomas More Society, and served as a volunteer Juvenile Court referee for 17 years.
He was active in the St. Francis Xavier Catholic Community by serving as Vice President of the Parish Council, Past President of the Little League and Past President of the Brophy Dads’ Club.
He leaves behind his cherished wife, Joyce. He found love and contentment with her as his partner. Judge D’Angelo had five children with his former wife, Nancy. He was predeceased by his son James in 1996. He is survived by his daughters Julianne D’Angelo Fellmeth (Robert), Annemarie D’Angelo (Gary Tatum), and Elisa D’Angelo Weichel (Tim), son Thomas D’Angelo, and daughter-in-law Christine Wilson. He leaves five grandchildren, Meredith, Daniel, Caitlin, Sydney and Jackson, his sister Mary Neglia, and several nieces and nephews.
Peter will always be remembered as a kind and generous person.
The family will celebrate Peter’s life at a Funeral Mass at 4:00 pm on Wednesday, May 18th at Brophy Chapel, 4701 N. Central Avenue. In lieu of flowers, the family suggests that any memorial contributions be sent to Hospice of the Valley, 1510 E. Flower Street, Phx 85014.