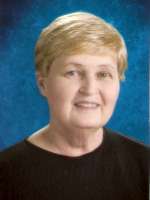 68, died on July 5, 2010, after a long and courageous battle with breast cancer. Sheila was born in Michigan in 1941, moved to Phoenix in 1979, and most recently resided in Scottsdale. She was bright, caring, strong, generous, and had a deep faith in God. Sheila loved to shop, read, volunteer, and spend time with family and friends. She was a loving mother and grandmother whose family came first. She is preceded in death by her husband, Dr. Charles Sanders, parents William and Elizabeth Buchanan, and brother William Henry (Hank) Buchanan. She is survived by her five children and their spouses, Elizabeth and Robert Navarro, Jennifer and Steve Rigby, Kristen and Jeff Johnson, Carey and Chris Hausbeck, and Charles and Melissa Sanders. Sheila is also survived by her sister Mary Briguglio and brother John Buchanan. Sheila was the proud grandmother to six children, Alexis and Nicholas Navarro, Taylor and David Rigby, and Amanda and Abigail Johnson. A Rosary will be held at 9:30 am on Friday, July 9th, 2010 followed by a Memorial Mass beginning at 10:00 am, St. Theresa Catholic Church, 5045 E. Thomas Road, Phoenix and luncheon immediately following the ceremony. In lieu of flowers, the family is asking that donations be made to St. Vincent de Paul Society.

Offer Hugs From Home Condolence for the family of SANDERS, SHEILA ANN