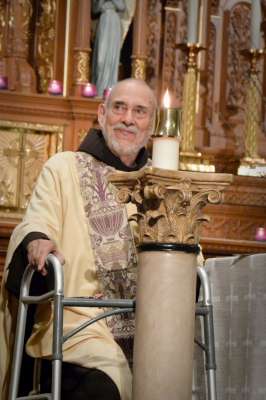 Friar Alonso was born as George in Caracas, Venezuela, the son of Romualdo De Blas and Alice Moler on October 25, 1939. He attended schools there and at St. Mary’s in Phoenix, AZ. For two years he was a high school student there before his investiture in the Franciscan habit at Mission San Miguel on July 6, 1958. He was given the name of Alonso at that time. A friar who was physically large but with a tender, gentle heart throughout his years of teaching at Garcia Diego High School in Santa Barbara, CA. In 1991, he became retreat master at the Franciscan Renewal center, Scottsdale. In 2000 he was a guardian and parochial vicar for St. Mary’s High School and was beloved by his students and he in turn dedicated his life to them. Friar Alonso’s love for the friars was outstanding and he was always welcomed wherever he went by his confreres. He was joyful, enthusiastic and supremely happy to be a follower of St. Francis. He attracted many a person with his humor and kindness. For some years, he suffered chronic pain in his legs which never seemed to heal. He was also a diabetic but certainly (and unfortunately) loved his chocolate and other goodies despite his diabetic condition. At the Franciscan Renewal Center he was cared for by his friars until, in January of 2015, sickness caused him to enter the Beatitudes Assisted Living in Phoenix. It was here that he passed to eternal life on March 6, 2015. Friar Alonso was 75 years old, 55 years professed and 50 years ordained. He is survived by Maria Teresa Mulligan (Tom) and Romualdo De Blas (Bonné). Vigil will be from 2:30 – 7:00 PM with a Funeral Mass at 7:00 PM on Friday, March 13, 2015 at St. Mary’s Basilica, 231 N. 3rd Street, Phoenix. Inurnment will be at 11:00 AM, Saturday, March 14, 2015 at St. Francis Catholic Cemetery, 2033 N. 48th Street, Phoenix. In lieu of flowers donations may be made to St. Mary’s Food Bank, 2831 N. 31st Avenue, Phoenix, AZ 85009 or the Franciscan Renewal Center, 5802 E. Lincoln Drive, Scottsdale, AZ 85253. Arrangements entrusted to Whitney & Murphy Funeral Home.