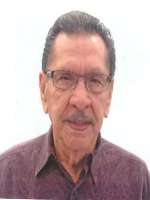 Passed away on January 17, 2013 Phoenix, Arizona, with his beloved wife, Francis De La Rosa, at his side.  He was born in Tempe, Arizona, served in the U.S. Army, and retired from the City of Phoenix Transportation Department.  He was a long-time parishioner of St. Agnes Catholic Church.  Besides his wife, Francis, he is survived by his children Guy De La Rosa, Cindy De La Rosa, Jessie Mejia, Silvia Paul, grandchildren and great-grandchildren.  Visitation will be held from 9:30-10:30am, Rosary at 10:30am and at Funeral Mass at 11am at St. Agnes Catholic Church, 1954 N. 24th Street, Phoenix, Arizona, 85008.  Interment will follow at St. Francis Catholic Cemetery, 2033 N. 48th Street, Phoenix, AZ.