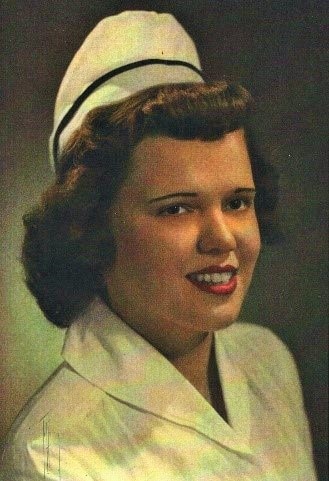 Geraldine Alice DeJohn, originally of Muskegon Heights, Michigan peacefully transitioned to her eternal home on Wednesday, March 30, 2022 in Scottsdale, Arizona. Geri, as she was affectionately known, was born in the family home on Highland Avenue to Eleanor (Humphreys) and George Bringedahl. Geri loved the Lord and was a lifetime member at the Lutheran Church. Geri will be remembered for her fun and loving personality and for the many friendships she built. Geri joined the Cadet Nurse Corp at Henry Ford Hospital in 1944 during World War II. She graduated from Ford Nursing School in 1947. In June of 1949 Geri and Alvi DeJohn were married and lived in the Muskegon area for 14 years. They moved to Arizona with their 3 children in 1963. Geri earned her Bachelor’s in Nursing at NAU while working at Scottsdale Healthcare Osborn. She retired from Scottsdale Healthcare after over 20 years of service.
Geri loved to travel with friends and family. She especially loved her trips to Hawaii, Alaska, and Norway. She loved learning new things – rafting on the Colorado River, Skiing, Golfing. She enjoyed bible study, quilting, Tai Chi and had a lifelong love of playing bridge.
Those left to cherish her memory include her children Sharon Miller, Diane Rogers, and Daniel DeJohn with wife Melanie Norton; her sister Carol Collier of Seaford, Virginia; her grandchildren Tricia Courchesne and husband Paul, Matthew Miller, Celeste Rogers, Jennifer Miller, Todd Rogers and wife Michelle, Keith Miller and Spencer DeJohn and wife Jessica; 10 great-grandchildren; 2 great-great grandchildren; and her many loved nieces, nephews and friends. Geri is preceded in death by her husband Alvi; her parents George and Eleanor; her brothers George and Dick Bringedahl; her sisters Eleanor Wachsmuth and Ruth Bringedahl; and her great-grandchild Travis Courchesne.
In lieu of flowers, memorial donations may be given to Hospice of the Valley, 1510 E. Flower St. Phoenix, AZ 85014 – or – Banner Alzheimer’s Foundation, Attn: Memorial Giving Program, 2901 N. Central Avenue, Suite 160, Phoenix, AZ 85012.

Offer Hugs From Home Condolence for the family of DEJOHN, GERALDINE ALICE