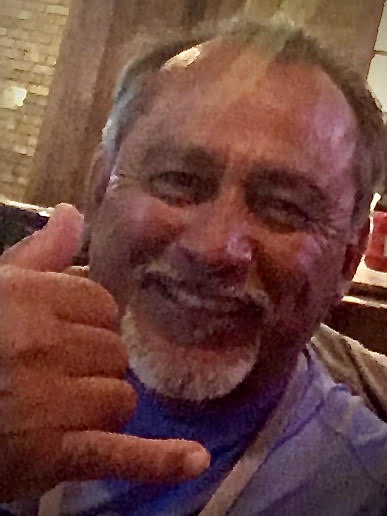 Fred Delgado joined his beloved wife in God’s Kingdom on December 20, 2020 due to complications of Covid 19. He joins his Mother, who also recently succumbed to this horrible virus, Father and Sister (Irene) who proceeded him. The son of Lydia and Santos Delgado, Fred was born on February 20, 1955. Fred retired from Century Link with over 30 years of dedicated service. He was also a beloved soccer coach and trainer for 40 years.

Fred was part of a family of 4 sisters: Rosa (Manuel), Flora, Gracie, Irene and three brothers: Santos (Roberta) John (Pam), Joe (Francis). Once he started, he could tell hours of stories about his childhood, growing up in Casa Grande, his uncle’s farm in Stanfield, traveling throughout the west with the farming camps and the unbelievable stories of chaos he and his siblings would cause. One of his favorite events was the Annual Delgado Family Christmas Party where he could catch up with everyone, crack jokes and admire the love shared throughout the night. Throughout his childhood he was taught to value hard work, loyalty, determination and the importance of family. Those were key values, among many, he instilled in the people he loved, including his own children.

His family was at the heart of his life. He didn’t admit it many times publicly, but his brothers and sisters were his anchor, always there for advice, a laugh and unconditional love. He created great memories with his in law family through youth sports, celebrating kids events, sharing great food, family vacations and the always entertaining family parties to name a few. He took joy in the relationships with his many nephews and nieces, some he was able to coach, some he had a parental influence and others he admired their accomplishments from afar.

Fred was married to the love of his life and best friend, Sandy, for 46 years. They met when he was 15, started dating when they were 17 and married at 19. He joked he only dated her for her Nova, but we all know, they were soul mates from the moment they met. Their marriage withstood the ups, downs and trials of life. They were best friends, creating lasting memories and later in life, rediscovering their love and passion for one another. Their carinos, jokes and own language made people laugh and were the basis of many great stories. Their marriage served as a great example of true love, consistency, loyalty and longevity. They loved one another until their last days, entering the hospital together, then later joining each other in heaven only two weeks apart from one another.

Together they had three children, Freddy, Richard (Kaitie) and Jennifer (Matt). His father had a great influence over Freddy as he followed in his Dad’s footsteps and became a coach. They shared great memories on and off the field, traveling throughout the world coaching, playing and enjoying time together. He respected Richard for his bravery, courage and the father he became. He talked about visiting Richard and his family more often, especially excited to watch his grandson Gavin compete in wrestling, just like Papa. During conversation, he described how the birth of Jennifer changed his life. It made him look at the world through a different lens, softened him, allowed him to take his life in a new direction. He had a special and unique relationship with each of his children.

He experienced an indescribable joy when he became a grandfather. Papa was always ready to give a hug, kiss or tickle, sneak a sugary treat, buy a present, sneak away for some fun or somehow find a way to spoil his six grandchildren (Jayden, Emma, Gavin, Sophia, Stella Rose and Wyatt).

He made an incredible impact in his community through his coaching career. He was a cherished part of the Arizona soccer community since 1980. His earliest coaching experience began with Spitanly Soccer Club. Fred then continued successful ventures with numerous clubs but not limited to Santos, Cisco, Sereno, Blackhawks, Phoenix Rising, St. Mary’s HS, Southpoint HS and the Steamboat Soccer Academy. He served as a mentor and coach at all levels including club, high school, junior college and NAIA. His commitment, dedication and hard work were rewarded with both club and high school state championships. He was one of the earliest members of the coaching staff at CCV Stars. And he was also part of the inaugural coaching staff for the Women’s Soccer Program at Arizona Christian.

His coaching style was similar to his approach in life. He could be demanding and tough, but everything he did was out of love and to make each individual the best version of themself. He was known for giving his players their own nicknames, with each team having a few classics like the Terminator, Fozzie Bear, Jake from State Farm and Pedro Blanco among many others. It was heartwarming to see a grown adult approaching Fred at a mall, soccer field or in public, greeted with a hug and a smile as they reminisced about the days when he coached them, the lessons he taught and the love he gave.

Fred was known for his friendliness, smile, sense of humor, quick one liners, extremely giving nature and a warm up suit for every occasion. His bright and friendly personality was known to start conversations with complete strangers. He rarely met a person he didn’t enjoy. And after most conversations, he left people a little happier.

Fred’s lasting legacy will be his family and the several hundreds, maybe thousands, of players he worked with over 40 years. He once commented that he lived a great life if he was able to pass along a smile, a warm heart or a little joy to share with the world.

Services are currently postponed and will be announced in the near future.

Offer Hugs From Home Condolence for the family of DELGADO, FRED