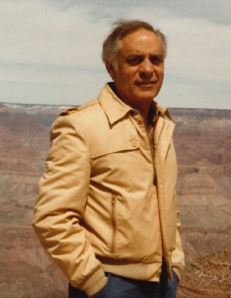 Robert Delgado of Phoenix, AZ passed away on Friday, July 26, 2019 at the age of 93 in the company of his loving family. A native of Tampa, Florida, Robert married Gloria Vidal on September 27, 1947, the day of his 22nd birthday. They were married for 68 years until Gloria’s passing on May 27, 2015. Robert was always a strong proponent of education as evidenced by his own personal experience. Even though no one in his large family had ever graduated from a university he determined that he could not achieve his life goals for both himself and his family without a college degree. So while married, working a full time job, and with two infant children, he attended night school for 8 years at the University of Tampa, finally gaining a bachelors of science degree in business. The degree led to a remarkable 28-year career with Anheuser Busch. He started with AB as a staff accountant in their Tampa brewery, was trained to run their then emerging computer systems department, and ended his career as plant controller at their Columbus Ohio brewery. His achievement being the first to earn a college degree made him a role model in his family, as his children, along with many of his nieces and nephews followed his lead earning degrees and establishing themselves as professionals in a variety of fields. He was a man of strong character, principal, and integrity; and was admired by many for his incredible intellect. He was also a kind and caring man, and he will be deeply missed. Robert is survived by his son Robert Michael Delgado (Denise) and his daughter Debra Susan Evans (Stephen), two granddaughters; Emily Gray (Jack) and Elizabeth Gerlach (Patrick), two great-grandchildren Louisa Jane Gray and August Robert Gerlach. The family will celebrate Robert’s life in a private ceremony. Condolences may be expressed at www.whitneymurphyfuneralhome.com

Offer Hugs From Home Condolence for the family of DELGADO, ROBERT