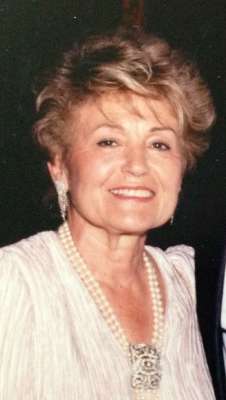 Margaret Alexander Dellas, 96 passed peacefully May 8, 2017 in Scottsdale with family at her side. She was born in 1920 in Logga Greece, the daughter of Alexander Petropoulos and Sophia (Dracopoulos) Petropoulos. After her husband’s death, she relocated to Scottsdale, Arizona in 1988 and resumed her career as a hairstylist in Scottsdale and Paradise Valley. She was a member Holy Trinity Greek Orthodox Cathedral in Phoenix, and it’s Philoptochos Society chapter. Margaret was preceded in death by her husband, Alexander, her parents, her brother Nick Petropoulos, daughter in law, Carol Marie Dellas and nephew Alexander Petropoulos. She is survived by her children, Anastasia of Scottsdale and Hercules of Phoenix, brother Gust Petropoulos (Beverly) Gurnee, Illinois and nieces, and nephews in Illinois, Colorado, Greece and Sweden. Margaret was always fashionable, optimistic, loving and charming. She will be dearly missed. Visitation will be 5-8 pm Tuesday, May 16th 2017 with Trisagion Service at 7pm at Whitney & Murphy Funeral Home, 4800 E. Indian School Rd, Phoenix, AZ 85018. Funeral Service will be held Wednesday, May 17th at 10 am at Holy Trinity Greek Orthodox Cathedral, 1973 E. Maryland Avenue, Phoenix, AZ 85016. Interment will be in Illinois. In lieu of flowers, donations may be made to Holy Trinity Greek Orthodox Cathedral, Phoenix, AZ.

Offer Hugs From Home Condolence for the family of DELLAS, MARGARET ALEXANDER