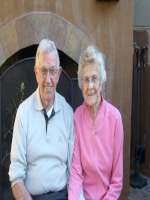 passed away peacefully on Friday, 6-24-2011. He was born on 1-29-1921 in Tomah, WI to Mamie and Dirk Derksen. He married Maurine Agnes Johnson on 2-12-1944 in Minneapolis, MN. Larry served in the Army Signal Corps in WWII in South Pacific and Alaska. He moved his family to Phoenix, AZ in 1952 where he worked for Allied Signal until he retired in 1980. “Derk” was an avid outdoorsman and loving husband, father, grandfather, uncle and friend. Larry was preceded in death by his parents, his brothers Reuben and Norm, his son Dr. Timothy Derksen (Carney), his daughter Maurine (Molly) Lasswell (Steve), and his granddaughter Elena Lasswell. He is survived by his wife Maurine, his sons Larry (Cari), Mark, Pat (Melanie), Dan (Krista), his daughter Katie Tourville (Tom), his 28 grandchildren and 17 great grandchildren. Visitation/Prayer Service will be held Wednesday, June 29 from 6-8pm with a Funeral Mass on Thursday, June 30 at 10am. All services held at St. Gregory Catholic Church, 3424 N. 18th Avenue, Phoenix. In lieu of flowers you may make donations to Catholic Charities Community Services, 4747 N 7th Avenue, Phoenix 85013.