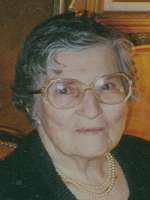 94, passed away peacefully at home with her family on November 1, 2009. She was born the sixth of eight children in Detroit, Michigan in 1915. In 1942 she married Ernest Di Vito, and in l951 they brought their three children to Phoenix. In l957, she was widowed, and after raising her children she pursued a life-long dream of a college education. Mary earned an Associate Arts Degree at Phoenix College, and went on to have a successful career as a medical records technician at the Maricopa County Hospital. She is survived by her sons Michael (Jutta) and Joseph (Leslie), daughter Rosanne Sbrocca (Romano), her loving and caring brother Frank Ventittelli, 8 grandchildren and 8 great grandchildren. Visitation will be held at Whitney & Murphy Funeral Home, 4800 East Indian School Road, on November 6, 2009 between 5:00 pm, and 8:00 pm, with a Rosary at 7:00 pm. There will be a celebration of Mary’s life at St. Agnes Catholic Church, 1954 North 24th Street, at 10:00 am, November 7, 2009, with a Graveside Service to follow at St. Francis Catholic Cemetery. In lieu of flowers, Memorial donations may be sent to Hospice of the Valley, 1510 E. Flower Street, Phoenix, AZ 85014.

Offer Hugs From Home Condolence for the family of DI VITO, MARY T.