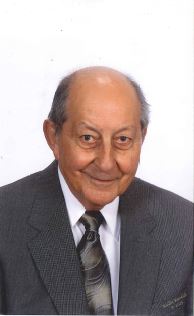 Michael R. Di Cerbo. “Toastmaster Mike”
On Monday, February 26, 2018 in the early evening, a true gentleman who believed this was a wonderful world, took his last breath. Mike was born December 14, 1923 in Philadelphia, Pennsylvania. He was always proud of his Italian immigrant roots. Both parents, Rosalie Modugno Di Cerbo and Louis Di Cerbo, had come from the Naples area of Italy and married in Philadelphia. Mike’s mother was determined that as the first grandchild he should be able to speak Italian to his grandparents. Throughout his life Mike spoke Italian as often as possible. Mike entered the Navy during World War II and spent 9 years working as an Aviation Machinists Mate until the Korean Conflict was resolved. He spent those 9 years at the Norfolk, Virginia Naval Air Station. He met and married Rosalee (Lee) Hoving who was a WAVE in the Navy on March 2, 1945. Their son, Michael and daughter Mary, were born in Norfolk in 1947 and 1949 respectively. After being honorably discharged from the Navy, the family moved to Columbus, Ohio where Mike was able to finish his Bachelor’s Degree in Industrial Management at Ohio State University. After a very cold 18 months working for General Motors in Pontiac, Michigan, the family moved to Phoenix in 1957. Their son Paul was born in 1959. Mike worked as a Manager for Motorola Semiconductor for 38 years. Six of the years were spent in Geneva, Switzerland and another two years in Hong Kong. Mike and Lee wanted to see the world and this opportunity of working abroad fulfilled that dream. They were delighted that their children also had the opportunity to travel. For 37 years Mike was a Toastmaster which he thoroughly enjoyed. He was the District 3 Governor in 1987-88. In retirement, Mike gave back to the community many times over by volunteering his time to teach Toastmasters Youth Leadership to elementary and middle school students in the Scottsdale Unified School District and several other districts. Teaching speaking and leadership skills nearly every day of the week to the students was one of the highlights of his life. He made many lasting friendships with teachers, administrators and students. Mike was a recipient of the prestigious Hon Kachina Award for his work with the students. As he aged Mike continued to make friends with people many years younger and he felt that kept him young and engaged in the world around him. Mike is survived by his wife of nearly 72 years, Lee, his son Michael, daughter Mary, son Paul (Valeri), beloved grandsons, Adam (Sophia), Nico (fiancé Michelle). Mike delighted in his great grandsons, Wesley and Luca. He is our rock, our patriarch who is loved and will be missed until we all meet again. As Mike would say, “Ciao!” A Visitation will be held on Friday, March 2, 2018 from 6:00 P.M. to 8:00 P.M. at Whitney & Murphy Funeral Home, 4800 E. Indian School Road in Phoenix. On Saturday, March 3rd a Funeral Mass will be celebrated at 10:00 A.M. at Our Lady of Perpetual Help, 7655 E. Main Street, Scottsdale.

Offer Hugs From Home Condolence for the family of DiCerbo, Michael R.