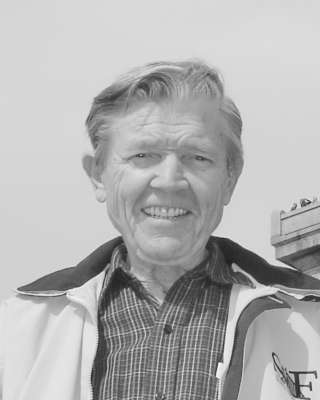 of Phoenix, age 89, passed away on January 20th, 2016 after a short illness with cancer. Dick was born December 2, 1926 in Boston, MA as the eldest child of Harold W. and Ida Maud Connor Dixon and grew up in Newton, MA. He qualified for a prestigious NROTC program at Harvard during WWII and graduated with a degree in physics before going to work as an engineer for General Electric. During an internship with General Electric in Schenectady, NY he successfully wooed Dolores “Dee” McFadden of Stafford, KS with his playful antics and charm and they were ultimately married on December 17th, 1949. In 1963 he transferred with GE and lived in Kirkwood, MO for a year before transferring to Phoenix where he remained until his death. During his time in Phoenix he worked with General Electric and then, after a merger, with Honeywell Information Systems and finally as an independent consulting engineer before retiring. Dick loved sports and family. He was a lifelong fan of the Boston Red Sox and grew to be an avid “Sun Devil” fan, attending many football and baseball games. He was an excellent golfer. He enjoyed playing bridge and traveling with family. He was an inveterate builder and tinkerer; constantly working on his cars and homes. Realizing a vision he shared with Dee, in his 80’s he completed a second family home on Oak Creek in Sedona that has been enjoyed by all the extended family.   Dick was a loving father and husband and always a gentle man. In passing he leaves a void and will be greatly missed by all who knew him. After 53 years of marriage, his wife, Dee preceded him on September 29, 2002. He is survived by his three children, Bradley S. Dixon of Iowa City, IA, Eric L. Dixon of Sedona, AZ and Laurelle C. McCarthy of Phoenix, AZ; six grandchildren, Brienne D. Anderson of Atlanta, GA, Brett E. Dixon of Garner, IA, Richard (Brock) Dixon of Iowa City, IA, Mathew S. McCarthy of Phoenix, AZ, James McCarthy of Phoenix, AZ and Tyler McCarthy of Phoenix, AZ; and his sister, Shirley Upton of Kennebunkport, ME.

A reception for neighbors and friends will be held on January 31st, 2016 from 3-5 PM at his home in Phoenix and a Memorial Service will take place on February 2nd, 2016 at his home on Bear Wallow Lane in Sedona, AZ. Arrangements entrusted to Whitney & Murphy Funeral Home.

Offer Hugs From Home Condolence for the family of DIXON, RICHARD “DICK” COVE