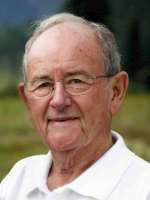 James Robert Dohogne, born October 11th, 1930 passed away peacefully on May 18th, 2012 holding the hand of Mannette, his wife of 54 years. A native of Phoenix, Arizona, Jim was an altar boy, Eagle Scout and attended St. Mary’s High School. He graduated Cum Laude from the University of Notre Dame in 1952 with a Bachelor of Science in Mechanical Engineering. His passion for flying then drew him to the Air Force. Jim met Mannette in Milwaukee, WI where they married in 1957 and then moved to Phoenix. After a 30-year career in the aerospace industry, Jim was fortunate enough to retire and continue to pursue his life passions of flying, flight instructing, hunting and fishing. Jim and Mannette have enjoyed the last 14 years in Wickenburg, AZ. Jim was an extremely caring and devoted husband, father and friend. Jim leaves behind his loving wife, Mannette, and four children, Deb, John, Mark and Dan. He is also survived by his ten grandchildren, Ben, Dan, Claire, Ileana, Briana, Jacob, Adam, Luke, Drew and Thomas. Memorial Service will be held Friday, May 25th at 10AM in Brophy Chapel, 4701 N. Central Avenue, Phoenix, AZ. In lieu of flowers, donations may be made to The Leukemia & Lymphoma Society.

Offer Hugs From Home Condolence for the family of DOHOGNE, JAMES ROBERT