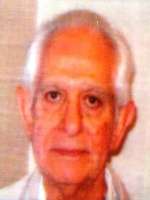 Passed away on July 7, 2013 at the age of 85. He was born on November 27, 1927 in McNary, AZ to Ramon and Barbarita Dominguez. Pete was a World War II Navy Veteran, attended Phoenix College and A.S.U. He was preceded in death by his mother and father and his siblings Henry, Frances, Jimmie, David and Ida.  He is survived by his wife, Edwina, of 62 years; his three sons, Ronald (Rachel), Pete Jr. (Jodie) and Matthew (Donna); his four granddaughters, Christina, Gabrielle, Emily and Mia Rose and brother, Raymond. His joy in life was his family. A Funeral Mass will be held at 10:00am, on Monday, July 15, 2013 at Ss. Simon and Jude Cathedral, 6351 N. 27th Avenue, Phoenix. Private services at the National Memorial Cemetery of Arizona to be held at a later date. Services entrusted to Whitney & Murphy Funeral Home.

Offer Hugs From Home Condolence for the family of DOMINGUEZ, PETE M.