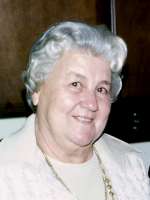 95, of Phoenix, passed away December 25. Born May 5, 1916 in San Francisco, CA and brought to Phoenix at the age of 5 when her parents purchased a farm on the outskirts of Phoenix on 44th Street near Roosevelt Road. Josephine was in the first graduating class of St. Mary High School. She was preceded in death by her husband Charles and brother, Frank Bergero. She is survived by her brother Andrew (Theresa), sister-in-law Anita Bergero, sisters, Anne Cortopassi and Mary Mulvihill (Robert) and numerous nieces and nephews. Visitation will be held from 12:00-1:00pm, followed by a Funeral Service at 1:00pm, Monday, January 2, 2012 at Whitney & Murphy Funeral Home, 4800 E. Indian School Road, Phoenix. Interment will be Private. In lieu of flowers, the family requests that donations be made to Hospice of the Valley, Fund Development, 1510 E. Flower Street, Phoenix, AZ 85014 or Peoria Good Shepherd, 10323 W. Olive Avenue, Peoria, AZ 85345.

Offer Hugs From Home Condolence for the family of DONATO, JOSEPHINE (Bergero)