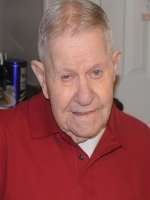 Edward McCrea Dorcy died April 7, 2013 at age of 95 in Phoenix.  Ed was born the 6th of 7 children on August 29, 1917 in Butler, Pennsylvania to Michael Morgan Dorcy and Margaret Della McCrea Dorcy.  Ed’s mother died in the influenza epidemic that followed World War I.  Ed contracted polio as a child which left him with a weakened left arm and hand.  As a therapy Ed took up swimming and the game of golf.  Making up for the weakness, Ed developed what many called a near perfect golf swing and a very low handicap in his golf playing days.  As a teenager, he left Butler to join his father who was in the jewelry business in Omaha, Nebraska.  The year Ed graduated from Creighton Prep (1937) in Omaha, his father re-married and Ed became a big brother to seven more siblings. After high school, Ed attended optometry school in Chicago.  During World War II Ed was ineligible for military service; however, he made his contribution to the war effort working for the aircraft defense industry in San Diego, California.  Following the war, Ed joined his father in the jewelry business in North Platte, NE for several years. Subsequently, Ed joined the Franciscan Order as a brother becoming a sign language specialist and remaining 25 years until his retirement.  As Ed was always very sensitive to cold weather, he chose to stay in the warmer climate of Phoenix for most of the latter years of his long life.  Ed was a kind and gentle man, much loved by family and friends alike.  He is survived by five brothers, many nieces, nephews, grand nieces and nephews.  A Memorial Mass will be celebrated at Ss. Simon and Jude Cathedral, 6351 North 27th Avenue, Phoenix, on Monday, April 29th at 10:00 am.  Inurnment will take place in Evans City, Pennsylvania at a later date. In lieu of flowers, a donation to St. Vincent de Paul Society-Phoenix, P.O. Box 13600, Phoenix, 85002 or 602-261-6814, is suggested.

Offer Hugs From Home Condolence for the family of DORCY, EDWARD MCCREA