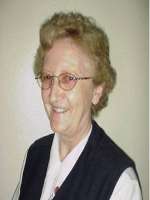 Sister Loreto Downing IBVM (Catherine Mary Downing) died peacefully on June 22, 2013.  She was the second child of Bartholomew and Hanna (O’Mahony) Downing.  Born and raised in Whitechurch near Blarney, Co. Cork, Ireland, she entered religious life with the IBVM Sisters in Loreto Convent, Fermoy, Co. Cork, in January 1957.  Later, having completed Masters Degrees at National University of Ireland, she began her teaching career…first in Ireland, and then in New Orleans, LA, USA.  Her first teaching assignment in the U.S. was at St. Benilde School in Metairie, LA, and then she served as principal there from 1980 – 1994. Under her fine leadership, St. Benilde School received the Blue Ribbon Award for Excellence in Education, and Sister Loreto traveled to Washington, D.C. to receive this prestigious award.  Eventually, in 1995, Sister Loreto was assigned to serve the people of Ss. Simon and Jude Parish in Phoenix, where she has been serving as a Religious Education Programs Director for the past 17 years. Her catechists and office staff, students, and parents have been truly blessed with her untiring service, expertise and guidance.  She will be deeply missed by her immediate family, Bernadette, Eleanor, Anne and Michael, and by her beloved brothers-in-law, Eddie and Liam, her sister-in-law, Anne, her nieces, nephews and all her relatives and friends, and also by her IBVM Religious Sisters.  She will be dearly remembered by all who had the pleasure of working with her, or learning from her, and also by those who availed of her rich spirituality through spiritual direction.  Sister Loreto demonstrated the meaning of Gospel discipleship. She was fully committed to carrying on the teachings of Jesus and giving of herself wholeheartedly for the sake of spreading God’s Kingdom here on earth.  She appreciated all of God’s gifts to others and to herself, and her favorite advice was, “Have an attitude of gratitude!” The motto on her Religious Profession ring was, “Servant of God’s servants” and Sister Loreto truly exemplified this.  Visitation and Rosary will be held at Ss. Simon and Jude Cathedral, 6351 N. 27th Ave., Phoenix, on Tuesday, June 25, 2013 from 7:30 to 9:00 P.M. with a Rosary at 8:15 P.M.  Funeral Mass will be held on Wednesday, June 26, 2013 at 10:00 A.M. at the Cathedral with interment following at St. Francis Catholic Cemetery.  In lieu of flowers, donations may be given to The Loreto Sisters’ Retirement Fund or to Sister Loreto Memorial Catechist – Formation Scholarship Fund. Arrangements entrusted to Whitney & Murphy Funeral Home.