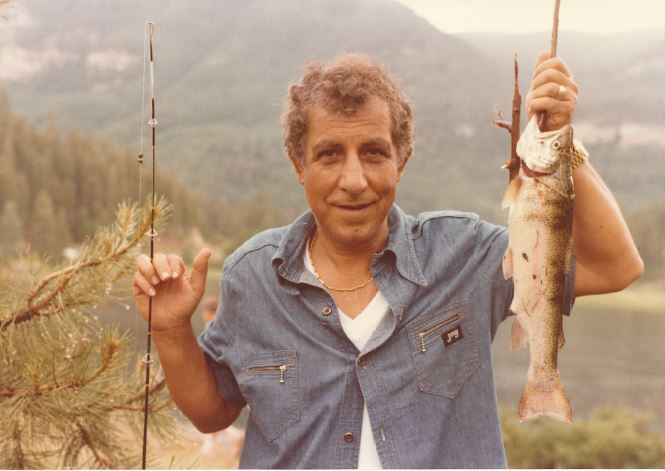 I chose The Road Not Taken for Stan’s prayer card in lieu of a scripture passage because Stan was fond of this poem. It is a bit of a misnomer though because, for Stanley J. Dru, everything needs to be plural. He took many roads and most of them were untraveled and wanting wear. Moreover, he neither strolled, walked, nor contemplated much. He sprinted with boundless energy and determined zeal.

Stan was born September 3, 1928 in Cyprus, the youngest child of John and Helen Droussiotis. He had two sisters, Chrysoulla and Avghi, and a brother, Andreas. He grew up in the city of Larnaca and attended The American Academy School. Cyprus was a neglected British Colony at this time and Stan felt very fortunate that he and his siblings always had clothes, shoes, and bicycles. He was a strong-willed boy and was disciplined at school for taking down the British flag: an omen of what would later evolve into fierce determination in his adult life. It is worth noting that today he is personally honored with a large plaque in the entry hall at The American Academy for his philanthropy. Stan always steered his own ship.

Stan immigrated legally to the United States when he was 17 and went to work in his uncle’s grocery store in New Jersey. He was drafted into the Air Force shortly thereafter. He saw intense front line action during the Korean War including a battle in which the soldier next to him was blown up by a grenade. He rose to the rank of Staff Sargent, was awarded a Good Conduct Medal, and was honorably discharged.

After his military service, he settled in the fast-growing and opportunity-rich city of Phoenix with his first wife, Pauline Annos, and their three young children, Karen, Lisa, and John. Stan worked at the Title Company during the day, pumped gas in the evening, and saved up money.

He accumulated $2000 in savings and bought his first piece of vacant land. He sold this parcel for $5000 a month later and launched himself into his first career as a real estate speculator and land syndicator. He gave his termination notice at the Title Company and they wished him much success, saying his job would be waiting for him should he desire to return. Stan estimates that he may have owned every vacant parcel in Phoenix at one time or another, and rumor has it that he had his own filing cabinet at the Title Company.

Land speculation evolved into a second career in Real Estate Development and Property Management. Working exclusively with architect Al Beadle, Stan developed many midcentury modern commercial buildings on properties requiring a change of zoning. He could wear down, irritate, cajole, and persuade a city zoning board like no other.

One of his favorite projects was the Executive Towers, the first luxury high rise apartment building in Phoenix. Everyone told him this project was a folly and doomed to fail. Stan proved them wrong and he enjoyed attending the recent ceremony awarding Historical Preservation to the Executive Towers.

He developed the Fifth Avenue Medical Building and the Missouri Medical Plaza and everyone told him he was crazy because doctors would not want to be in the same building as their competitors. Stan proved them wrong and both of these new projects leased up immediately and are still successful today.

He developed the Montego Apartments, another luxury residential endeavor, and once again everyone said he was crazy, this time because people would not pay such high rents. Stan again proved them wrong, and he himself enjoyed living at the beautiful Montego for several years.

Stan won the 30-year contract to develop the headquarters for Mountain Bell Telephone, beating out a slew of famous national developers vying for this plum contract. Everyone told him he did not have a chance but he proved them wrong and was awarded the contract with his brilliant Al Beadle architectural rendering, sheer guts, and relentless persistence.

In 1981, Stan took a breather for a couple of years and married his second wife, Amy Barmeier. They enjoyed their new marriage and joyfully welcomed the birth of two sons, Christopher and Alexander. However, Stan got antsy for another entrepreneurial undertaking and had recently heard that bingo on Indian reservations might be something worth looking into.

He formed a partnership with the Sycuan Band of Mission Indians in San Diego, launching his third career. He developed the first large and glitzy Las Vegas-style Indian Gaming Casino for Sycuan. Never mind that bingo was the only game played at the time. Stan felt that approval for slot machines, poker, and blackjack tables was just around the corner. Everyone told him he was crazy and that he would fail. Stan proved them wrong. The Sycuan Casino was groundbreaking, wildly successful, and served as a model for all future reservation gaming.

From 1999 through 2007, Stan turned to philanthropy in his birth country of Cyprus. He spent five years planning, building, and furnishing a church on the campus of a large school for handicapped and mentally disabled children in Nicosia, Cyprus. He enjoyed travelling all over Russia and Europe to select and commission the finest panels, murals, altars, rugs, chandeliers, and stained glass for the church. To cap it off, he built a handicapped accessible swimming pool for the children residing in the facility.

WHO WAS STANLEY J. DRU, THE MAN? He was the Honorary Consul of Cyprus for 25 years and was very proud to hold this position. He dearly loved his children and Cyprus family members, and provided generously for each and every one of them. He was razor smart and street smart and his sense of humor was intelligent and acerbic. Stan’s grasp of world events, world religions and world history was beyond impressive. He travelled from sea to sea and pole to pole, leaving no item unchecked on his bucket list. He was an avid outdoorsman, fly fisherman, and hunter, having bagged massive brown trout in Tierra del Fuego and a polar bear in the Arctic. He was a discerning collector of fine art objects and paintings. He truly loved and appreciated art, architecture and museums all over the world.

Stan had superhuman energy levels, no one worked longer or harder hours. No one explored the world more exuberantly. And by the way, no one shopped and searched out good food with more gusto. He was, at times, an exhausting man to attempt to keep up with. Stanley J. Dru wrote THE playbook, accomplished all of his goals, and lived a rich, full, and generous life with no stone left unturned.

Offer Hugs From Home Condolence for the family of DRU, STANLEY J.