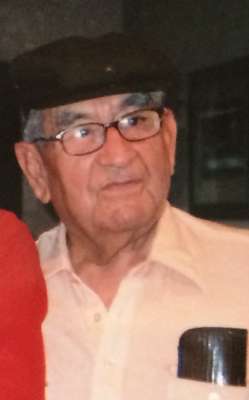 Hector L. Duarte (“Toy”), passed away on the 22nd of May 2014.  Toy was born in Phoenix on November 24, 1924 to Jesus and Artemisa Duarte.  He grew up in the Golden Gate neighborhood.  Toy was an Army veteran of World War II, serving in the Pacific Campaign.  He was also a life-time member of the American Legion Post #41 and member of the Honor Guard.  Preceded in death by his wife Irene Duarte.  Survived by daughter Delores Martinez (Carlos) and sons Robert (Stella) and Raymond, 10 grandchildren, 28 great-grandchildren and 1 great-great-grandchild.  Visitation will be held from 9:00 – 10:00 A.M., with Funeral Service at 10:00 A.M., Wednesday, May 28, 2014, at Whitney & Murphy Funeral Home, 4800 E. Indian School Rd.  Interment will follow at St. Francis Cemetery.

Offer Hugs From Home Condolence for the family of DUARTE, HECTOR L. “TOY”