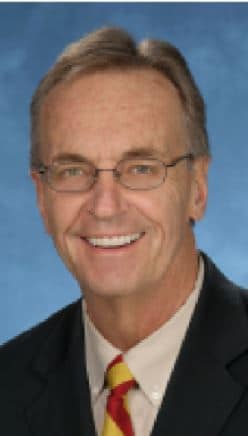 Daniel Duick, MD, FACP, MACE, ECNU, Dan passed peacefully, surrounded by family on January 5, 2022. He was an Illinois native growing up in Skokie and attending Loyola Academy, University of South Dakota for BS/MS degrees in Bio Sciences and graduated from Northwestern University Medical School. He completed his medical residency and endocrinology fellowship training at both USC – Los Angeles County Hospital and Walter Reed Army Medical Center before serving two years of active duty as a Major in the Army at the now dismantled Fort Ord, California.  He subsequently joined the staff of Mayo Clinic (Rochester, MN) for six years before moving to Phoenix, Arizona where he served as the Director of the Internal Medicine Residency Training Program for 12 years at St Joseph’s Hospital and Medical Center, Phoenix, AZ. Dr Duick then joined Endocrinology Associates, PA, in private practice in the Phoenix/Scottsdale/Chandler metro area. He also practiced in Cape Girardeau, Missouri (1992-1998) and then rejoined Endocrinology Associates, PA., until his retirement in December 2018.

Professionally, Dr. Duick, was a specialist in endocrinology, but early on sub-specialized in Thyroidology and practiced, performed active research and published in the fields of primarily Thyroid Tumors, Thyroid Cancer and Parathyroid/Calcium disorders. His clinical practice focused on optimal management and research to aid in the diagnosis of thyroid nodules and treatment of active and progressive thyroid cancer. He co-edited and co-authored four editions of the textbook: Thyroid Ultrasound and Ultrasound-Guided FNA defining the utility of ultrasound for thyroid and parathyroid diseases. Dan was one of five pioneering physicians at Mayo Clinic in Rochester, MN (1976) who developed the technique and performed fine needle aspiration biopsies of ultrasound indeterminate thyroid nodules. Today, it’s estimated that there are more than 600,000 FNAs performed annually on thyroid nodules in the United States (with multiple millions more performed around the world). Greater than 75% are benign when examined under the microscope and preclude the necessity for open neck surgical removal for diagnosis. Thus, in the USA, over four decades, many hundreds of thousands of patients annually have been able to avoid thyroid surgical procedures resulting not only in better patient wellbeing but also a massive dollar savings in health care costs. Dan and his colleagues expanded this knowledge and training efforts throughout North America, Europe, the Middle East, North Africa, Australia, New Zealand and portions of the Far East. Dr. Duick was the Past President of the American Association of Clinical Endocrinologists (2008-2009) and the American College of Endocrinology (2010-2011).

He was married for 57 years and is preceded in death in January 2021, by his wife, Diane Elizabeth (Flynn) Duick, formerly of Sioux Falls, South Dakota. He enjoyed fishing and golfing and traveled often nationally and internationally but did not want to go anywhere unless his wife Diane was able to go and enjoy the experience with him. He is survived by two of his three children; Daniel Duick, David Duick (deceased) and Jennifer Duick; and three grandchildren, David Krieger, Delaney Krieger and Calvin Anderer. He is also survived by two brothers: Emory Duick of Des Plaines, Illinois and Gregory Duick, M.D., of Wichita, Kansas and a third adopted brother since second grade, Bud Petrillo of Scottsdale, Arizona. Despite the time the medical profession took away from time with his family, they did not feel he was ever absent. He was always home for the family dinner and never missed an opportunity to pack up the family in the car and drive somewhere for a vacation. He continued this with his grandchildren, often traveling all over the United States. He loved science and teaching, moreover, he loved to learn and continued expanding his knowledge his entire life . He will be remembered by his family, lifelong friends and colleagues for his humor, intellect, and compassion. His ability to understand the human state and the human being while being empathetic in sharing his knowledge and advice made him beloved by his family, friends, colleagues and patients. He would want to be remembered as a loving and devoted husband, father and grandfather, but those who knew him will remember him as a brilliant physician and the person you went to for help and clarity. And although he would never admit it himself, his success as a physician (who reached the pinnacle of his profession) was matched with a prodigious humility. All this being said, Dan never held himself to a higher esteem than his colleagues. Despite his many professional accomplishments and titles, he pushed to be a friend and family leader first and foremost—and it’s that legacy of love, humility, and grit that warrants the immense respect even strangers will send his way. His life of service and ability to give of himself was shaped by his deep faith in Catholicism. The grief from the loss of him from this world will not be forgotten but is tempered by the knowledge that he is reunited in health with his beloved wife and son in the care of God.
A viewing will be held on Wednesday, January 12, 2022 from 5:00-7:00 PM at Whitney & Murphy Funeral Home, 4800 E. Indian School Phoenix, AZ 85018. Funeral Mass will be held on Thursday, January 13, 2022 at 12:00 PM at St. Thomas the Apostle church, 2312 E. Campbell Ave, Phoenix, Arizona 85016, followed by the burial at Saint Francis Catholic Cemetery, 2033 N 48th St, Phoenix, Arizona, 85008. Post-burial, a reception to celebrate Dan’s life will be held at his
daughter Jennifer’s home; 3526 E. Piccadilly RD, Phoenix, Arizona, 85018 and all are welcomed.  The funeral Mass can also be live streamed or watched at a later time by going to the church website at www.staphx.org. Donations in his memory can be made to the Leukemia and Lymphoma Society at lls.org, The American Foundation for Suicide Prevention at afsp.org, and he would want anyone able to join the bone marrow registry at bethematch.org
Condolences may be expressed at www.whitneymurphyfuneralhome.com

Offer Hugs From Home Condolence for the family of DUICK, DANIEL