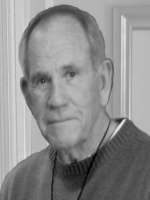 Frank Joseph Echenique, age 81, died in his home in Peoria, AZ on May 1, 2011 after a short battle with cancer. Born April 12, 1930, in Glendale, AZ, the son of Frank and Serapia Echenique, he attended St. Mary’s Grammar and High School. Frank served in the U.S. Air Force during the Korean War, after which he attended the University of Arizona where he earned a Bachelor’s Degree in Business Administration. He served as Credit Manager for several large Corporations, including Air California and Casa Blanca Fan Company. He married Elaine Rodgers in 1956. Frank is survived by his six children, Jennifer (Rodriguez), Frank Echenique, Michelle Echenique, Suzanne (Miller), Marie (Clinkinbeard) and Jacqueline (Beauchamp), nine grandchildren, many nieces, nephews, cousins and many close friends. He was born and raised in Glendale, AZ. He was a long time resident of San Clemente, CA. He then returned to his native AZ and remained in Peoria. Frank was very proud of his Basque heritage. He traveled to Spain and Western Europe over the years visiting family and getting to know the Basque country. Frank was a long time lover of health and nutrition. He also loved to hike and experience the outdoors. Plans for Memorial Service are pending. His family requests that in lieu of flowers, donations be made to Hospice of the Valley in Phoenix, AZ.

Offer Hugs From Home Condolence for the family of ECHENIQUE, FRANK JOSEPH