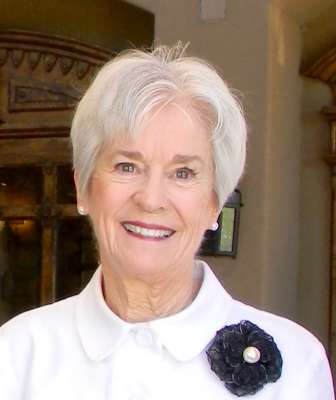 Margi Bohmer Edlund passed away peacefully, surrounded by her husband and children at Hospice of the Valley in Scottsdale, Arizona, on Tuesday, October 11th, 2016. Margi was born January 19, 1942, in St. Cloud, Minnesota. She was the middle child of five of Donald “Don” and Miriam Bohmer. She was raised in a magical 19th century Victorian home, for which she was instrumental in its being listed in the National Registry of Historic Places. Margi graduated from Cathedral High School in St. Cloud in 1960, where she was chosen as Homecoming Queen in her senior year. Her college years were spent at St. Catherine’s University in St. Paul, Minnesota. Before her graduation in 1964, she made numerous friends, some of whom remained so throughout her life. She subsequently earned a degree in education at the University of Minnesota.

In 1966, having seen enough cold weather, Margi moved to Phoenix to live with her sister, Kathleen. She became a seventh grade English teacher, which all would agree is a challenging occupation. In June of 1968, she began dating Phil Edlund, who became the love of her life and husband on December 27th, 1968. They settled in Phoenix where Phil practiced law with the Fennemore Craig firm. Margi and Phil had three children, Krista, Gary, and Shelly.

Margi’s greatest joy was her family and friends. She loved to travel.  She and Phil made numerous trips to Europe with friends, family and for golf.  They also visited Asia and South Africa.  In recent years, they drove around the western United States visiting friends and national parks.  Margi and Phil also enjoyed numerous golf trips to lovely locations around the country, enjoying time on beautiful courses with very special friends. Looking back, she made clear that her life had been most fulfilling. Margi was known for her warmth and loyalty to family and friends. She was a wonderful wife, mother and friend.

Margi was a member of the Junior League of Phoenix and Paradise Valley Country Club, and offered her time and talents generously. She was most proud of her dedicated involvement with the Juvenile Diabetes Research Foundation, Desert Southwest Chapter, where she was a long time board member. Margi chaired the 2006 JDRF Promise Ball, which featured the Beach Boys as entertainment and raised over $2.2 million for the organization. For many years, she made annual trips to Washington D.C. to lobby the Arizona Congressional Delegation on behalf of JDRF for increased funding to the National Institute of Health for diabetes research.

In lieu of flowers, the family would request that memorial contributions be made to the Juvenile Diabetes Research Foundation, Desert Southwest Chapter, 4343 E. Camelback Road, Suite #230, Phoenix, AZ 85018.

Offer Hugs From Home Condolence for the family of EDLUND, MARGI BOHMER