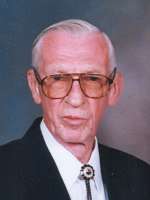 Passed away September 1, 2010 in Scottsdale, AZ. He was born June 7, 1924 in State Center, IA. to William and Gladys Eggers. He remained in Iowa until he enlisted in the US Navy. He served from 1942 to 1945 aboard the USS Carter Hall LSD3 in the South Pacific. He moved to Phoenix as bakery manager to the original crew of 6 at Smitty’s Supermarket. He owned Bartlett’s Bakery for a few years and returned to Smitty’s until retirement. After retirement, he worked part time for 19 years at ABC Cake Decorating Supplies. He volunteered for 29 years at the VA Hospital, 15 years at the State Veterans Home and served as State Chairman for Elks National Service. Survived by his wife, Pat Eggers, 2 sons, Rick (Wendy) and Todd (Lisa) and daughter, Karol Kenner. Preceded in death by first wife, Jane, his parents, infant son, brother Lloyd and sister, Delores. Visitation will be from 5:00-8:00 pm, Tuesday, September 7, 2010 with a Funeral Service at 10:00 a.m. Wednesday, September 8, 2010 at Whitney & Murphy Funeral Home, 4800 E. Indian School Road, Phoenix. Interment will follow at Greenwood Memory Lawn Cemetery, 2300 W. Van Buren Street, Phoenix.

Offer Hugs From Home Condolence for the family of EGGERS, ARNOLD WAYNE