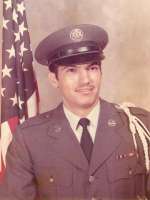 Joseph Karim Eid, of Phoenix, AZ passed away on Monday, October 1st, 2012 in the comfort of his home with his family at his side.
Born in Lebanon, June 15, 1955, he served in the US Air Force and graduated from California Culinary Academy, going on to travel the world as an executive chef. He then went on to become a chef instructor at Le Cordon Bleu College of Culinary Arts in Scottsdale, AZ for 15 yrs. He also served as a Cedar Club Banquet Hall Board member for the last 5 yrs.
Joseph is survived by his wife, Maguy; parents, Karim and Adele, brothers, Elie (Debbie), John (Jondarc), Tony, Faez (Jessy), Sam, Abe (Jessica) and sister Marie. Visitation will be held from 5:00-7:00pm with a Rosary at 7:00pm on Sunday, October 7th, at Whitney & Murphy Funeral Home, 4800 E. Indian School Road, Phoenix. Funeral Mass will be held on TUESDAY, October 9th, 2012 at 11:00am at St. Joseph Maronite Catholic Church, 5406 E. Virginia Avenue. Interment will follow at 1:00pm at National Memorial Cemetery of Arizona, 23029 N. Cave Creek Road, Phoenix.

Offer Hugs From Home Condolence for the family of EID, JOSEPH KARIM