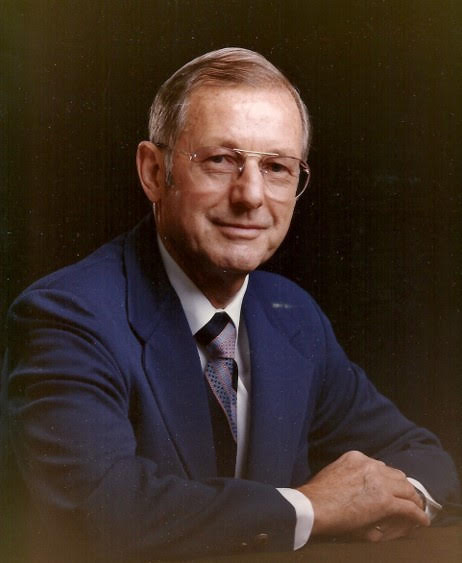 Thomas McCaffrey Eldridge of Phoenix, Arizona, passed away peacefully on August 8, 2019.
He lived a full life of 100 years. Tom is survived by his wife, Ruth, and brother, Patrick, along with three children: Barbara Starr, Tom (Nancy) and Mary Ann Wilson. He is also survived by seven grandchildren and eleven great grandchildren. He was preceded in death by his first wife, Frances, daughter Kathleen and granddaughter Jenifer.
Born in 1918 in Salt Lake City, Utah, he was the third oldest of nine children of Walter and Anna Erin Eldridge. He graduated from Phoenix Union High School and Phoenix College, summa cum laude, and went to work for New York Life. On his 23rd birthday, December 7th, 1941, the Japanese bombed Pearl Harbor. One-month later Tom was in the Navy and served on the Pacific Front in the Marshall Islands where he survived a fierce bombing attack by Japanese planes during the night. He served four years during the War as a Chief Petty Officer in charge of payroll and supplies. One year later, he met and married Frances Marie Gasparine, and worked for Mehagians Home Furnishings selling appliances. He left Mehagians and went to work for Arizona Public Service in 1962 as a Marketing Manager, traveling throughout the state of Arizona selling gas and electricity. During these years, Tom and Fran raised their three children and were very active in St. Gregory’s Catholic Church. Tom took on many several leadership positions in the community including: The Knights of Columbus, the Serra Club, a Catholic businessmen’s organization, the Sales & Marketing Executives of Phoenix, and the Reserve Officers of the Naval Service (RONS) Club.
In 1985, Frances passed away from cancer. Shortly after he retired from APS in 1988, Tom met and married Ruth Weaver. They had a wonderful life together for 30 years. They enjoyed traveling together, playing golf and taking several trips back to Ruth’s hometown in Ohio. Tom is also survived by Ruth’s daughter, Diane, sons Jim, Mike, Jeff, Rob, 9 grandchildren and 16 great grandchildren.
A Funeral Mass will be celebrated at 10:00 am on Saturday, August 24, at Brophy Chapel. Mass will be preceded by visitation and Rosary Service at 9:00 am. Interment will follow at St. Francis Cemetery. The family thanks Paradise Living Centers and Advanced Hospice of Arizona for their kind and loving care of Tom. Memorial donations may be made to St. Vincent de Paul Society, or Advanced Hospice Care of Arizona, 2045 S. Vineyard, Ste. 127, Mesa, AZ 85210.

Offer Hugs From Home Condolence for the family of ELDRIDGE, THOMAS M.