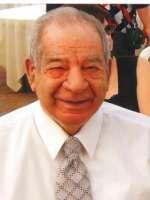 Tom Elias, 84, of Phoenix, passed away December 1,
2013.  He was born on May 8, 1929 inRay-Sonora, Arizona.  He was one of sixchildren born to Richard and Edna Elias.
Tom grew up in Phoenix, attending Emerson Grade School and graduating from North High School.  He served in the
National Guard and was a life-time member of the Elks Lodge.  He worked for thirteen years at Western Produce and many years as the assistant manager of Don Jose’s Mexican Restaurant.  Tom understood that the best things in life were the simple pleasures; good food, music, and playing the occasional slot machine at the casino.
Above all, he valued his strong relationships with God and his
family.  His favorite times were spent at family dinners, hosting an annual Christmas Eve party, and cabin trips to the mountains.  He is survived by his wife of sixty years, Gloria, his children, Virginia Sanford (Timothy Sanford), Tom Elias (Beth Elias), Mark Elias (Anne Elias), Tim Elias (Kelly Elias), and Maria Murphy (Bill Murphy), sixteen grandchildren, seven great-grandchildren, his sister Sally Romley, brothers George and Joe Elias and many nieces and
nephews.  He will be remembered as a hard-working, quiet, and loyal man with quick wit, a sparkle in his eyes, and his unconditional love and devotion to his family.  He will be missed by all.  Funeral Mass will be held on Friday, December 6, 2013 at 1:30 P.M. at St. Francis Xavier Catholic Church located at 4715 N. Central Ave., Phoenix, AZ 85012, with interment following at St. Francis Cemetery.  In lieu of flowers, the family asks that donations be made to Hospice of the Valley, 1510 E. Flower St., Phoenix, AZ 85014.  Arrangements entrusted to Whitney& Murphy Funeral Home.

Offer Hugs From Home Condolence for the family of ELIAS, THOMAS